When editing posts that are consistently or overwhelmingly written in one flavour of English, please do not change the flavour

I was rather unhappy with an edit to a post of mine (which I immediately rolled back as soon as I saw it). While one may debate about whether mannonic acid or mannuronic acid is formed in an oxidation of that type and the first equation was (deliberately!) incomplete I was especially unhappy about the changes that turned oxidise into its corresponding American (or Oxford dictionary in this special case) spelling.

Community consensus (which I fully agree with!) is at present not to change a post from one flavour of English — i.e. British, American, Australian, New Zealandish, South African, … — into another while editing. Please respect writers choices of English. See also the title to this question.

Note that adjusting misspelt words to the majority flavour is encouraged. So if a single colour is missing its u while everything else is clearly in British English, editing in the missing u is desireable.

A second motivation for writing this post is a recently suggested edit that included the following edit summary:

Comment: Spelling - when in americanized spelling, it's more popular in search engines = more traffic to question

See the following image of a Google search I performed just a few minutes ago to see that that is blatantly wrong. Search engines automatically substitute either forms for each other (and they are even great at ‘recongising’ misspellings and suggesting corrections for them, too). 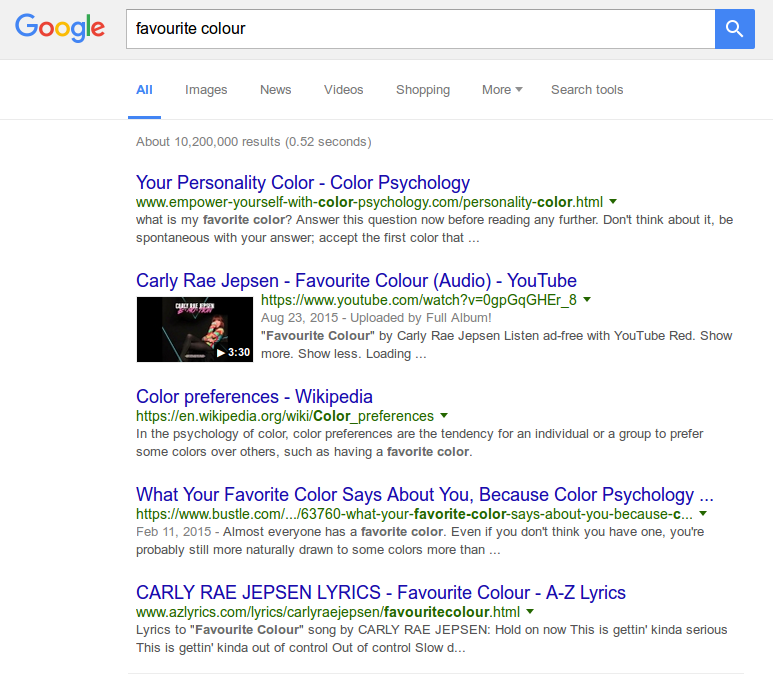 Revisiting this there are two things that I would like to comment on and perhaps draw others' attention to.

1. It is true that Google and other search engines do automatically search for both BrE and AmE variants. Therefore, the argument that using AmE draws more traffic is wrong. However, Stack Exchange search is not so smart. As such, searching for "color" and "colour" bring up two different sets of results altogether.

2. There are some elements which have variant spellings, notably caesium, aluminium, and sulfur. There is perhaps less debate over caesium and aluminium, but sulfur is one that sees both spellings used with some regularity on this website. This extends to its compounds, such as sulfuric acid, hydrogen sulfide, and so on.

IUPAC has adopted the spellings above for over two decades at least. As far as I can tell, this has been in place since at least the 1990 Red Book. I cannot find that online but the 2005 Red Book lists the element as "sulfur" and does not even list "sulphur" as an alternative spelling, despite "aluminum" and "cesium" being listed as such (Table 1, p 260).

Within the UK, the Royal Society of Chemistry has adopted the spelling "sulfur" and all its publications since 1992 have spelt it as such (see the footnote at the bottom of the article). For those who cannot access this article, I have quoted:

The new (1990) edition of IUPAC‘s ‘Nomenclature of Inorganic Chemistry’ contains a table of IUPAC-approved names ‘for use in the English language’. These include ‘caesium’, ‘aluminium’, and ‘sulfur’ (spellings as given here). There is increasing use of the ‘f’ rather than the ‘ph’ spelling for sulfur in English publications, in particular the English language versions of ISO and European standards, and those British Standards which implement ISO standards verbatim. Furthermore, there is no good etymological basis for preferring the ‘ph’ spelling. In view of these considerations, the Royal Society of Chemistry’s Nomenclature Committee has recently recommended that RSC change to using the ‘f’ spelling in all its publications. This recommendation will be implemented for RSC's primary journals in 1992.

And lastly, from my own observations as a student in the UK, common usage in the UK is also sulfur, not sulphur.

How far do we want to take the notion of BrE vs AmE? I do not particularly care about favourite colour being corrected (I myself exclusively use BrE), but additional questions must be raised when this goes against international recommendations and is not even the favoured spelling in the UK.

14
Prevention of unnecessary edits of old posts.
5
Should Titles Be Capitalized?
18
What are some basic guidelines for good edits on Chem.SE?
7
American vs British spelling: Is there a standard? Should there be?
5
Question & answer edits to improve searchability

7
Why is adding alternative text for images discouraged?
7
American vs British spelling: Is there a standard? Should there be?
51
Hidden points of editing you probably didn't know
21
How to ask and answer nomenclature questions?
9
Borderline self-promotional edit
6
A flag declined for being used like it's meant to?
17
I have a doubt about “doubt” in doubt titles
5
Question & answer edits to improve searchability
14
Prevention of unnecessary edits of old posts.
2
A clarification regarding the rejection of my recent edit