I'd noticed quite a few sites on StackExchange have adopted occasional challenges (in the style of the Programming Puzzles and Code Golf site on StackExchange) as a way of getting more people in the community engaged.

Chemistry.SE often has the same problems as the other sites who've had a go at this, namely that the bulk of questions are at an incredibly basic level and don't require multiple answers from different viewpoints or perspectives (which is possibly a topic of conversation in itself).

The idea of synthesis-golf is that it encourages people to get involved by providing an open-ended (but well defined) question that can be answered by users of different levels, hopefully encouraging both engagement and retention (and as @Ortho pointed out, anything that raises the bar scientifically is probably a good thing).

The first challenge I put up was to devise some route towards the molecule below, sodium Fluvastatin. 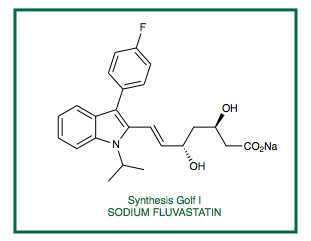 Fluvastatin was chosen since it was complicated enough to need more than a cursory glance (i.e. it was challenging enough not to bore the actual chemists here), but hopefully not so complex as to be off-putting. The mixture of heterocyclic chemistry with asymmetric chemistry was also appealing (for rather selfish reasons).

In the space of 10 days, the post received 23 up-votes (+1 down vote), 12 favourites, and 439 views. This is far above average for a typical question posted here (excluding featured, general-interest questions).

More importantly, the question also got 5 (4 ignoring my own) good quality answers, submitted by users with a variety of 'experience' (take that as length of time on chem.se or otherwise).

Whilst I think this 'experiment' worked well, there should probably be some kind of discussion amongst the community here as to whether or not theres any benefit to continuing with this. One issue is with the frequency/format of any synthesis-golf type questions, as I'd be the first one to argue that if the homepage gets spammed with 5 of them a day then the whole thing becomes awfully counter-productive.

Based on the comments so far, I propose the following (comments very much welcome, as above).

In the current format, I don't think these questions are in line with the question/answer format of Stack Exchange and seem much more suitable for a forum site (eg Reddit). They could be closed both on 'too broad' or 'primarily opinion based.' The suggestion by @NotEvans to award the correct answer with the shortest step count attempts to address the latter, but rigorous step count is not a good judge of synthetic strategy.

If I might make a suggestion to bring them more in line with the Q/A format, perhaps the question could be presented as solving a particular challenge that must be solved to achieve the synthesis of the target compound. For example, for fluvastatin, the question could be "How can the stereochemistry for the 1,3-dihydroxy moiety be established in fluvastatin?" Or "What indole synthesis could be used toward fluvastatin?" I think phrasing questions this way would still engage the creativity of the community and provide educational benefit to the audience, while narrowing the scope of the question to a manageable level and reduce the necessity for opinion in answering.

11
Reviving the old and hot discussion - When is the best time to accept an answer?
10
What about the magic in the questions?
14
Encouraging better questions: the topic challenge
2
Proposing a salt identification challenge series
8
Ask questions about [nmr] and [stereoelectronics]!
8
The five-tag limit and its implications
10
Suggestions for synthesis-golf targets
21
Interest in "Molecular Design Golf"?
3
Can we reopen the question about compound with the most diverse elemental composition?