What can or should we do with [pharmacology], [toxicology], [medicinal-chemistry]?

Recently toxicology has been created, which prompted this question. Originally I wanted to suggest renaming phamacology into phamacology-toxicology as the lines are especially blurry (in terms of chemistry).

Definition of pharmacology (from Merriam-Webster)

Definition of toxicology (from Merriam-Webster)

From the definition I understand, that toxicology is actually a part of pharmacology. Therefore (as the least intrusive action) I would propose merging the tags (or retagging) and create the synonym.

About three years ago, I asked a similar question:

At the time we decided to only merge drugs (main) with pharmaceuticals (synonym), but left out pharmacology and medicinal chemistry to revisit later.
As our site has matured quite a bit (we graduated in the meantime) I'd like to revisit this question. I am not en expert on the field and hence I am not sure what to do. Two options were presented at the time:

Klaus-Dieter Warzecha:
As far as the interaction of drugs with living organsims is concerned, medicinal-chemistry seems fully sufficient to cover various aspects, such as uses in folk medicine, metabolism, kinetics, etc. Consequently, pharmacology should be merged into it.

Greg E.:
In short, the semantic content and organizational utility of the tag [ref: pharmacology] in the context of this site is questionable, I think, but I'm also not sure that it exclusively overlaps strongly enough with any single other tag to make it a synonym.

To add another definition:

Definition of medicinal chemistry (Segen's Medical Dictionary. Retrieved from the free dictionary.)
The discipline involved in discovering and developing new chemical compounds into useful medicines; the analysis, development, preparation, and manufacture of drugs.
Medicinal chemistry begins after biologically validated targets have been screened against a diverse library of compounds and promising initial chemical structures (known as hits) have been identified; the hits are then optimised to improve their therapeutic index—potency vs. toxicity.

Definition of Medicinal chemistry (from nature.com)
Medicinal chemistry deals with the design, optimization and development of chemical compounds for use as drugs. It is inherently a multidisciplinary topic — beginning with the synthesis of potential drugs followed by studies investigating their interactions with biological targets to understand the medicinal effects of the drug, its metabolism and side-effects.

Definition of Pharmacology (from nature.com) Pharmacology is a branch of biomedical science, encompassing clinical pharmacology, that is concerned with the effects of drugs/pharmaceuticals and other xenobiotics on living systems, as well as their development and chemical properties.

Definition of Toxicology (from nature.com)
Toxicology is the scientific discipline concerned with the detection, evaluation and prevention of the toxic effects of substances that humans are exposed to. It has a key role in the development of new drugs, which are evaluated for potential toxic effects in preclinical studies, clinical trials and post-marketing studies with the aim of ensuring that their benefits outweigh their risks.

Pharmacology has now gathered 33 questions, medicinal-chemistry is clocking in on 62. Currently only 3 questions are overlapping. I didn't have time to go through all of them, but those I have read (about 20 score>3 questions) could (from my point of view) be reasonably tagged with either of the tags (if they were correctly tagged in the first place).

Given the above definitions and current uses, I suggest again:
Merge pharmacology and toxicology into medicinal-chemistry, keeping synonyms alive.

Editorial Notice: As of 27th of November 2017 the proposal is declined.

Medicinal chemistry definitely needs to be kept separate from the other two, which are slightly more related to biology. A lot of med chem is about the route towards designing a drug, which can include many things a pharmacologist would not really think about, such as traditional synthetic chemistry, correlation of molecular structure to bioactivity, molecular docking, etc.

I agree that on Chemistry there is no reason to have separate tags for such niche fields. However, I also don't think that it is appropriate to merge tags which technically mean different things, even if they use similar concepts (physics and chemistry both use calculus, doesn't mean they're the same thing).

Looking at the one question tagged with toxicology, it doesn't actually seem to have any chemistry in it. I would therefore recommend:

I don't think there's a need to change our tag structure based on one arguably off-topic question. Just my 2c, so please feel free to disagree - no offence will be taken.

I will draw on my education experience (Germany): for chemists, a course in toxicology was (legally) required, which was taught by the Pharmacology section of the combined Chemistry & Pharmacology department and attended by the pharmacology students (who merely had to sit through it). In it, the lecturers noted more than once (for the benefit of the pharmacology students) that while the terms were different, the concepts (available concentration in bloodstream, minimal effective dose etc.) were practically identical.

There were some students working on medicinal chemistry - they typically did not cooperate with the pharmacology section, but with the Med School.

I don’t think these tags should be merged at all as they correspond to different sciences, and was reiterated by Othocresol.

Although toxicology is covered in some pharmacology courses, its much broader than it looks and has many subsections. Additionally, medicinal-chemisty looks fine and should not be merged with anything.

For instance, in one source, it been defined as

the science that deals with the chemical nature and reactions of toxic substances, their origins and uses, and the chemical aspects of their exposure, transformation, and elimination by biological systems.

It would be unfair to limit it to clinical toxicology that is usually covered in some pharmacology courses.

I suggest leave pharmacology tag as it is, and either migrate that lone toxicology question to biology or merge with biochemistry, alternatively add the drugs tag.

I’d love to write a lot of reasons why, but have a busy schedule so I thought to give my opinion before the final decisions are made. AFAICT toxicology covered a tiny bit of my pharmacology course and I am not surprised, in fact as I said earlier its much broader science subject that a whole bunch of sections and different to pharmacology altogether.

My other suggestion, rather use both tags i.e pharmacology and toxicology or biochemistry and toxicology (just to be more specific) just as organic-chemistry can be used with other various tags such as alcohols, aromatic-compounds

Rereading the question, I want to offer another perspective on the matter - one that is perhaps less idealistic and more pragmatic from the point of view of chem.SE.

I stand by the three fields being different. However, from our point of view as SE users, it could well be argued that: anything that falls under pharmacology but not medicinal-chemistry is very likely to be off-topic on chem.SE anyway. So, why keep the tag? 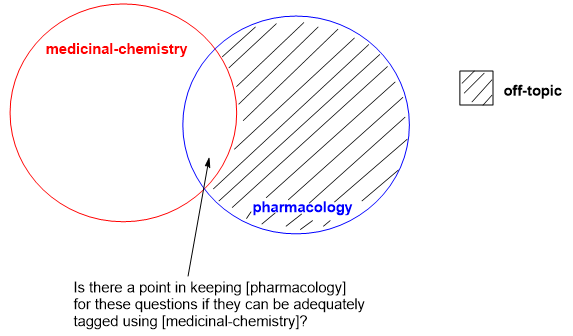 Based on this argument, then, I'd partly agree with the course of action proposed by Martin: merge pharmacology into medicinal-chemistry.

Obviously, if one can think of a counter-example to the above statement (i.e. a pharmacology but not medicinal-chemistry question that is on-topic), then this line of thought will fail.

I'll leave both of my answers up, so that people can have opinions to vote on.

Not the answer you're looking for? Browse other questions tagged discussion status-declined tags tag-synonyms .

1
Should we allow Synthesis questions subject to the six constraints listed below?
6
Merging 'drugs', 'pharmaceuticals', 'pharmacology', 'medicinal-chemistry'
6
Questions about the kinetic theory of gases
8
The five-tag limit and its implications
15
How much more effort would you have wanted?