Synthesis golf started over summer, and a few nice targets have been used as problems.

When we started, the academic year (in the UK at least) hadn't begun, meaning a few of us had a quite a lot to time to spend around here - this has tailed off slightly now term has began so I thought it might be a nice idea to open up the floor to suggestions for targets for future rounds of synthesis golf.

Each month, we'll use one of the targets (that hopefully get posted) below.

Some ground rules to keep this sensible:

Entries should include the following:

Notice: Used as target for the November 2017 Synthesis Golf 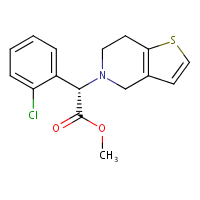 (+)-Clopidogrel (sold as Plavix)[1] is a common pharmaceutical used to help combat the risk of heart disease. The World Health Organisation lists Plavix on its list of 'essential medicines' due to its broad efficacy, low toxicity and low cost (less than 1USD/month in the developing world).

The original industrial routes [1] relied on racemic synthesis and resolution, however syntheses of a single isomer have been reported [2]

The molecule makes an interesting target as it requires the synthesis of an unusual heterocyclic core, as well as the challenging stereocentre which is prone to racemisation.

[1]: Original patents for preparation and resolution of the enantiomers by Sanofi. EP99802, EP281459 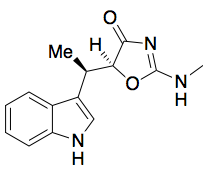 Indolmycin is an antibacterial agent, which acts by inhibiting bacterial aminoacyl-tRNA synthetase. Multiple chemical syntheses have been published,1,2,3 and enzymatic resolution of a key intermediate has been investigated by Kato et al.4 Its biosynthesis has also recently been elucidated by Du et al.5

Given that a racemic synthesis is extremely short (four or five steps, refs 1 and 2) and likely unchallenging, some extra conditions will likely have to be imposed. Firstly, if it isn't already obvious, the synthesis should be asymmetric (13 steps in ref 3). On top of that, my personal suggestion would be that the oxazolinone ring has to be made (since we have already had one round of indole synthesis, I think we can allow the indole to be bought).

Another possibility. TAK-457 is a drug (more accurately, a prodrug) that displays antifungal activity. As far as I can tell, it doesn't seem to have reached the market, but is still a fairly interesting molecule with some rings that we haven't featured yet: 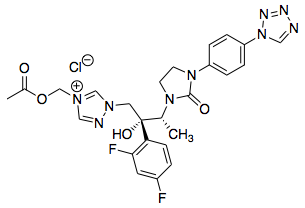 I propose mixing up the challenges and adding additional challenges such as this one: Organic Structure Challenge

16
Everything you need to know about Synthesis Golf
21
Interest in "Molecular Design Golf"?

1
Should we allow Synthesis questions subject to the six constraints listed below?
13
Synthesis golf I: thoughts/comments/suggestions
16
Everything you need to know about Synthesis Golf
21
Interest in "Molecular Design Golf"?
10
Suggestions for molecular design golf problems
7
Everything you need to know about molecular design golf
8
What is the difference between the tags [synthesis] and [total-synthesis]?