Non-English posts: Should edits that offer a translation be entertained?

This was a suggested edit to this post (link to revision in Spanish): 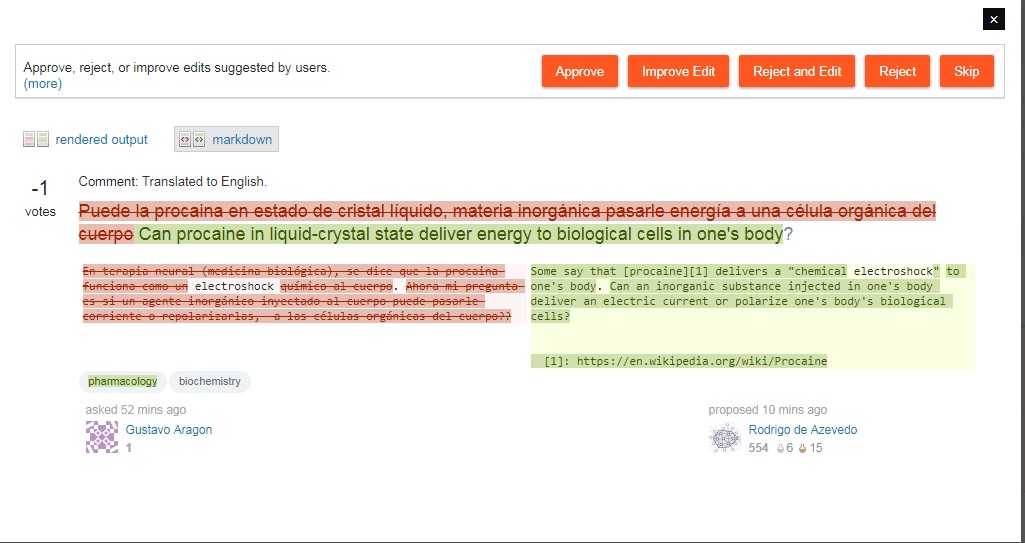 From what I can make out (largely thanks to Google Translate), the proposed translation is pretty much correct (and makes minor alterations in sentence structure).

Now I understand that such edits always carry the possibility of distorting the author's actual intentions (which counts in favor of rejecting the edit), but if it is the (seemingly) only means of making (a fairly good) question more accessible to the rest of the community, why not approve the edit (especially when it appears to be accurate)?

P.S. I neither approved nor rejected the said edit, but it looks good IMHO.

As of now, Martin and TAR already approved the edit. Accordingly, I've retracted my (unclear) close-vote on the said question and upvoted.

Yes, that was a strange one, but I decided it does no harm in accepting the edit. The history itself is preserved for anyone who wants or needs to know.

As far as it goes with the authors intention, we regularly edit posts here and in rare cases some of the initial intention gets lost. However, especially in this case, I think allowing the translation to stand on its own merit is superior to closing (and probably deleting) the post. It is in the better interest of the OP and also our site.

Such edits should be allowed; they preserve the original intent of the author in the purest way possible while promoting the question from close-worthy (‘unclear what you’re asking’ — aka I don’t speak Spanish) to keep-worthy (we can now all understand what OP is asking).

If you do not speak or read enough of the foreign language in question to confirm the approximate validity of the translation (as I would not be able to with Spanish), please click skip and let those who can decide.

This steps seems logical, but another better way of dealing with this would be to add the same question in another language for those specific users. So if A wrote answer in English, B can translate it in Spanish, and English users see A's answer whereas Spanish users see B's answer.

9
How should I handle unwanted edits to my answer?
15
When editing posts that are consistently or overwhelmingly written in one flavour of English, please do not change the flavour
15
Prevention of unnecessary edits of old posts.
1
What should be done if one "edit a closed question" and write a "completely new question" such that it gets reopened?
2
A clarification regarding the rejection of my recent edit
6
Are there scripts and stats that can provide a measure of the rate of "abandonment" of posts?
12
Disagree that these questions should have been closed