How to properly reject suggested edits that add mathjax to the title?

This happens once or twice every week with little variation: 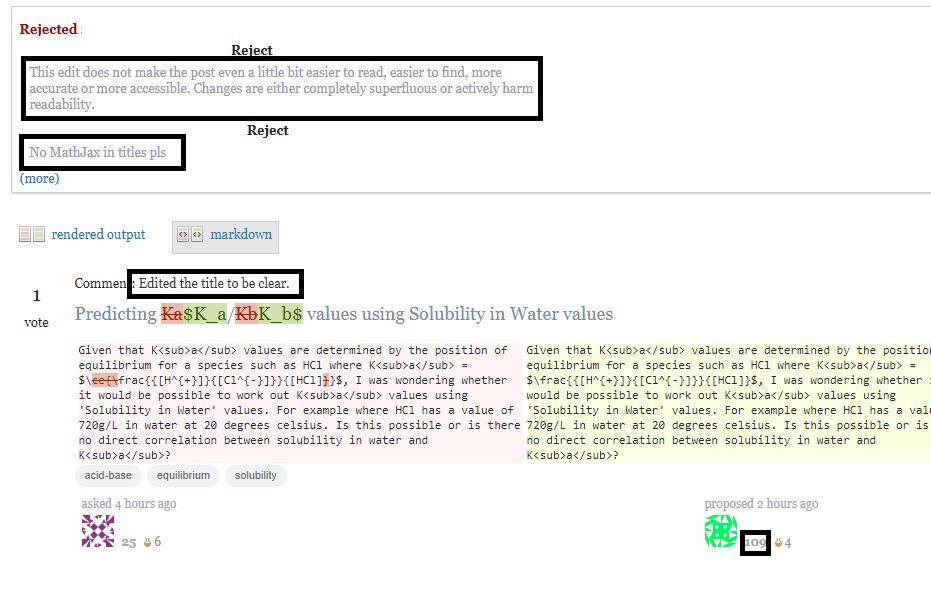 Let's go through the situation quickly:

Both of the reasons are likely to not help the user completely understand what's the matter here, and they are likely to repeat the error again, or give up suggesting edits entirely facing dejection on their first attempt. Not everyone knows about Meta, and where to find the information about "mathjax in titles".

Of course, I am not suggesting that suggested edit reviewers should comment about "No MathJax in titles" and link to a meta post. That would take much more time and is too difficult to put in practice. The return would be not worth the time.

However, I wonder if there could be a better way to reject such edits. Since this requirement (No MathJax in titles) is unique to our community, I wonder if a custom reject reason could be implemented - that would say something along the lines of:

The edit is an attempt at improvement, but we avoid MathJax in the title. Please see - chemistry.meta.stackexchange.com/q/261 - for details.

I think this would easily allows reviewers to reject the edit while also giving the user a complete understanding of where they went wrong.

Is this doable? Or is there another way that achieves the same motive? Thoughts?

PS: Within an hour of my submitting this meta post, the same user did the same thing to the title again. Here you can you see that the custom close reason looks much neater: 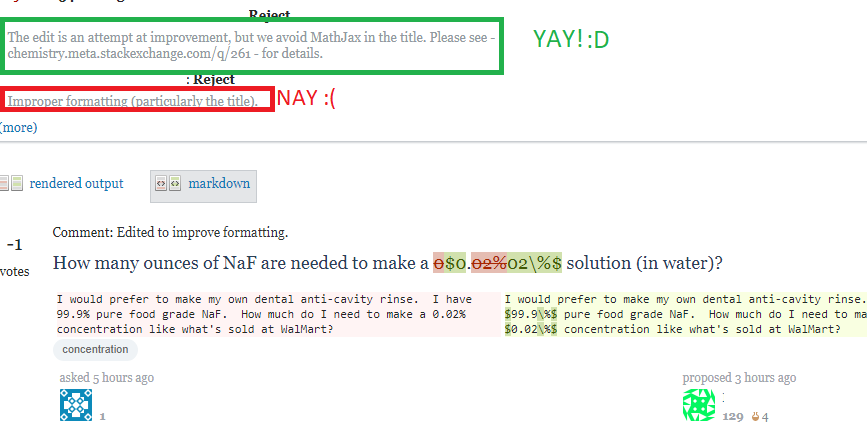 Of course, the problem at hand is how to execute this custom close reason efficiently.

Whenever I review the suggested edits, what I do before accepting or rejecting is to look at all the constructive edits, destructive edits, and missed out edits (certain things the editor did not fix).

If I see more constructive edits than destructive and missed out edits combined, I will approve and edit to fix the remains of his edits. I'll also ping him/her in the post's comments and tell them what mistakes they made in the edit. Once I get a response from the editor, I will promptly delete my comment and flag the editor's response as No Longer Needed.

If there are more destructive and/or missed edits, I will reject the edit (or rollback if already approved) and leave a comment telling them why the edit harmed the post (I would leave an edit summary if rollbacked).

Now, in your situation, you say that the only mistake that the editor made was to add $\LaTeX$ in the titles, and all other edits to the body of the post were constructive. I feel rejecting the edit was a bit too harsh, considering that adding $\LaTeX$ to the titles itself is mostly done with good intentions, and rarely maliciously. It would have been better to approve the edit, and edit the title yourself. This way, the editor gets both credit for his edit, and also learns not to add $\LaTeX$ to the titles.

Not the answer you're looking for? Browse other questions tagged discussion suggested-edits .

5
Why is adding alternative text for images discouraged?
9
Borderline self-promotional edit
11
I know that we mind the buzzwords but does that mean every single incident of each buzzword must be removed from every title?
15
When editing posts that are consistently or overwhelmingly written in one flavour of English, please do not change the flavour
12
I'm voting to close this question as off-topic because it's based on false premise
14
Close Votes Aren't Super Downvotes
5
Is the clarity of my question's title really “dubious”? Is that even a good adjective to use in this way?
5
What should happen to the unanswered duplicates after a newer duplicate of that question is answered?