Why are there no migrations paths to Physics.SE, Math.SE, etc.?

When flagging for migration to another SE network, the only option I get is chemistry.meta.stackexchange.com. Why are other SE networks not shown here, like Physics.SE (many questions fit there better than Chemistry.SE), Math.SE etc? 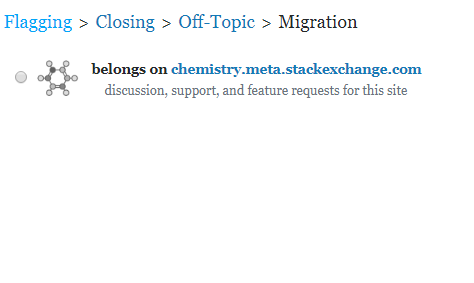 Quoting myself from Guidelines for closing as off-topic, belong on a different SE:

Migration in general is a thing we prefer not to do. Sometimes a good question simply gets posted at the wrong site; it should be closed first to determine that it is off topic, then flagged for migration. In borderline cases we moderators have to investigate if it is on topic at the target site, because migrations can be rejected and we don't want to give more work to other moderators. We do not have migration paths, because we hardly ever use this feature in the first place. There simply is not enough data, to support setting these up.

For further clearing up:

Why are other SE networks not shown here like Physics.SE (many questions fit there better than Chemistry.SE), Maths.SE etc?

Just because a question is better suited at another site, it does not mean it is off-topic here, hence it is no reason for migration. In any case, migration should be reserved for very occasional cases and there is no evidence to support that we actually need migration paths; i.e. there are too few cases so that we could actually benefit from user driven migration.

Please vote to close on question you think do not belong to our site with a custom reason explaining your reasoning. Once a question is closed, flag it for moderation ("... in need of moderator intervention"). The moderator team usually investigates whether the question is on topic on the target site, to avoid that a migration is rejected. In most cases, we do not migrate open questions (It has to be decidedly off-topic first).

Migration should only happen when the site on the receiving end actually wants the question; that is, the question should be good enough so the only thing wrong with it would be where it's asked. Needless to say, that is rare.

Community Managers could set up a migration path between two sites which works like a teleporter, and only then you'd have an option to flag for it. Maybe. Anyway, then, four close votes would suffice to give the verdict of migrating a question, eliminating mod intervention, but since close voters can be reckless, they tend to migrate crap, which just ends up feeling like throwing something into a trash can. The target site won't appreciate it.

On Chem, well, we just don't have too many migrations, and mods can handle them. It's more fun to blame for a rejected migration than to be blamed for it . . .

Because I had written nearly 75% of this by the time Martin and MAR posted, and because this covers a different perspective, I decided to post this in the end. This is intended to be more of a supplement to what has already been said, rather than a full answer.

An important problem with including these migration paths into the UI would be the unnecessary flags generated by the less experienced users.

For example, moderators will get flags to migrate "significant figures" questions to Math.SE. Only those users who've read our meta posts would know that sig fig questions are on topic for Chem.SE. But many haven't read the meta, and they'll happily raise that flag.

Similar would be the case with many questions about magnetism, electrons, radioactivity, and most importantly, thermodynamics! All these would get flags to be migrated to other networks. In fact, if you allow Biology.SE, then even biochemistry would get migration flags.

Just because a question is better suited at another site, it does not mean it is off-topic here, hence it is no reason for migration.

Not the answer you're looking for? Browse other questions tagged support feature-request status-declined flagging migration .

-2
No alternate SE sites show up as choices when flagging a Question to be "closed as off topic"
9
Guidelines for closing as off-topic, belong on a different SE
12
Enable migration paths to Physics and Biology
5
How can we flag question that belongs on another site in the Stack Exchange network?

2
Creating 'material-sciences', was: merging polymers and plastics
3
Are questions about the affect of certain chemicals on the human body on-topic here?
55
Hidden points of editing you probably didn't know
2
How to deal with "smart" toxic behaviour?
1
Is habitual down voting considered okay?