How do multiple users close a question for a reason that doesn't seem to apply?

But the oddest thing to me was that the site displays a message saying it was closed as "primarily opinion-based" by five different users. It seems unlikely that all five of the users reached this conclusion independently! I don't know what the UI looks like from the point of view of those users, so which of the following best describes the most common situation (across all Stack Exchange boards, not just chemistry):

(I think this distinction matters quite a bit, because in a recent blog post the management at Stack Exchange was asking what they can do to make the site more welcoming to newcomers. Regardless of how hard experts try to be "polite", one of the most off-putting things to me is when insiders create the false appearance of "consensus" against an outsider opinion -- "Hey n00b, all these people agree that you're wrong, so you should listen" -- when all they did was agree to form a coalition, rather than arriving at that conclusion separately and independently from each other.)

Bennett, I appreciated your previous detailed meta post, however, this one honestly goes a bit off-track. First, I hope you have read our Help center page on closing questions. If so, you would know that a moderator closing questions is different from regular users closing questions. The regular users in this context are +3k users, users who've spent time on the site, contributed by asking or answering, etc. They've earned their privilege to make such decisions.

Now, if you write a meta post like so, and indicate - just because one or two of your questions got closed - that they are "forming a coalition" and trying to close down on new users' questions, I doubt that would work. Regulars here are working in good faith, trying to keep the site neat and clean. They have no vested interests in closing down more questions, or in closing questions by a particular set of users. orthocresol already has said the most important stuff:

there is no public or private collusion to close questions on Chem.SE.

I assure you that StackExchange has multiple and rigorous mechanisms in place to prevent new users from feeling helpless when their post is closed. In fact, you can always contest the closure, via messaging in Chemistry Chat, or writing a meta post. You've already done the latter once, and the question was reopened too. Moreover, if a post on hold is edited, it is again sent to regulars for review, who now decide based on the new edited post.

Finally, here's an image of the close dialog box: 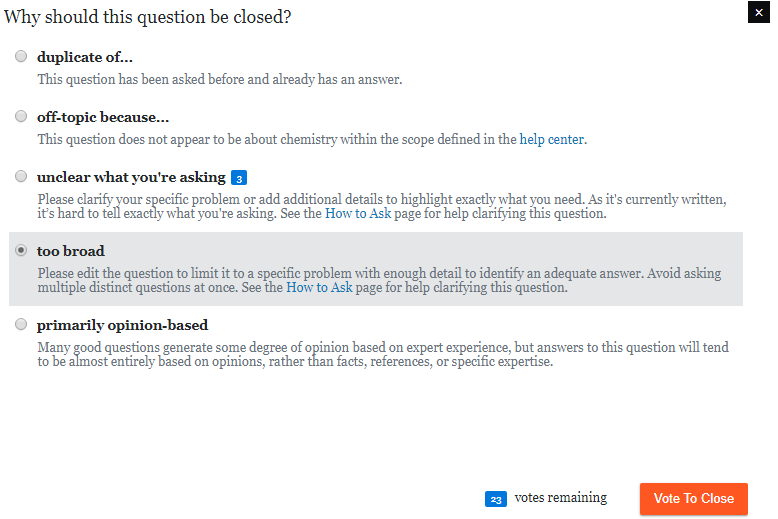 Notice that the number of close votes that have been cast is shown. These are beneficial to a reviewer because:

In all of these, one crucial fact is that which user voted to close - and with what reason - is not visible until the close process is over. (ignoring duplicate/custom closures). So, a regular has no way of knowing if their favorite CV reviewer has already voted to close. That is entirely pointless though because such a thing ("an unwritten rule that if one user does this"/"Hey gang, back me up on this") does not exist in the first place.

Here at meta we've had and continue to have countless discussions on how to make our site better for newcomers. You yourself can go through the previous posts and read them. Most of the regulars here have invested days of time in just discussing the philosophy behind these close boxes. We attempt to make our process as smooth, as less confusing, and as less error-prone as possible. Your post, therefore, would have been better if you didn't tried to imply - directly or indirectly - that there are collusions on our part. In fact, there aren't. There may be sometimes be errors though, after all, we are all human volunteers devoting our time to the site. (You're already seen one error before.) However, I'll repeat, those errors - if any - do not imply collusion.

Now, regarding your own post that made you started the thread, there were five close votes and two Leave Open votes. You can view them all in the timeline. Being the first to Leave Open, I don't see how exactly the post is opinion based. But, five other people did. So, it'll be best if one of them comes by and describes directly why the post was deemed to be worth a closure and how it could've been improved.

Thanks Gaurang. I think my use of "collusion" was harsh and sounded unnecessarily accusatory. What I mean is that any time there is a group making a collective decision, there is a tendency to follow the herd and pile on to an initial arbitrary decision, even if that decision is not objectively "right".

There are many psychological experiments demonstrating that people are more likely to make an objectively wrong decision if they think other people have already made that same decision. Solomon Asch did experiments where a test subject could be persuaded to say that line A on a board was longer than line B (even when line B was really longer) because everyone else in the room (really stooges of the experimenter) said that line A was longer. More apropos to the current scenario, experimenters have found that when teams are trying to solve a problem (e.g. guessing the number of beans in a jar), the teams did best when the experimenters imposed a rule that the team members couldn't talk to each other, and everyone just wrote down their guess and then the team would average them. Without this rule, the teams were usually further off because everyone would just coalesce around whatever answer was called out first, which seems analogous to what happened here.

Now, in the case where something is a duplicate of an existing question, that is a special case that depends on circumstances "external to the question", so it's helpful to see if someone else has noticed a duplicate.

Is there any reason to think this would not result in more accurate decisions? (Even if it's not realistic to expect the UI to be rewritten this way any time soon.)

p.s. as you can see, this would have been better as a comment reply to Gaurang's answer, but the character limit for comments was much too short to summarize this. Is there a better way to reply, other than submitting a second answer?

Not the answer you're looking for? Browse other questions tagged discussion close-reasons .

9
My question was closed as too broad, I edited it as directed, but nothing happened
-1
The reason "unclear" is unclear
1
frequent closure of questions as "off-topic" that do not seem to meet the published off-topic criteria

3
What should our custom off topic reasons look like?
12
FAQ update: How to ask (or close) questions that involve potentially controlled or dangerous substances?
3
Pronunciation questions
8
Isn’t this question basically ‘what should I study’?
19
How should we identify and handle answers that exist mainly to promote unconventional theories?
8
Gaps to Fill Without a 'Homework' Close Reason -- Overview
7
Is the question about a theory that predicts pKa values based on structure really 'too broad'?
12
Custom close reason text for "homework"