Your closure rate avoids your growth, I suggest leniency

Checking the count of open, closed and deleted questions of the site, I found the following stat: 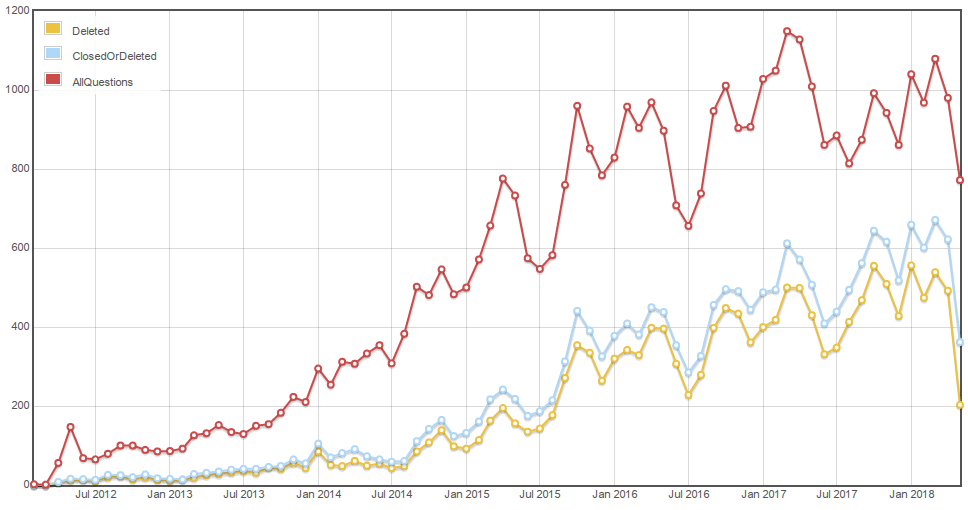 What we can see, is a roughly exponential growth of the site until around middle 2015. At the time, also the count of the closed/deleted questions has shown a sharp increase, until the point that the new questions surviving the review processes are stagnating.

A healthy site has life.

Don't expel the new users! Teach them - and continuously motivate them to improve.

Having such a nice stat of new questions is not typical for most SE sites. The typical is a slow, linear expansion. Having an exponential increase, it is not a problem source. It is a gift.

You, avid ChemSE users, should not simply expel the "fresh meat" (both in the sense of posts and users). At least, if you are interested on a successful, living, growing site, and not in a static one, working actively to avoid its own success.

The ones what you can't fix (both in the sense of posts and users), it is okay to expel (closures, downvotes), but if you avoid your growth with it, you are surely on the bad track.

It is particularly so for the first posters. They don't know too much about the site, their first experiences are crucial in their future participation. Do everything what you can, to make them feeling welcomed.

From my perspective: Both the question and fbueckert's answer suffer from (different) errors in their premises.

The question assumes that a high closure/deletion rate is ipso facto evidence of unhealth in the site community. It doesn't take into account any metric of whether the questions being closed/deleted "deserve" to be closed/deleted. I would argue that, as Chem.SE has grown and gained both popularity and visibility, it has attracted more and more questions I would argue are genuinely "low quality": those described in penta's answer here, where what appears to be a homework or test problem is copy/pasted or screenshotted into the question box, and that's it.

Of course, in the community's aggregate ... enthusiasm, I guess? ... to cull these sorts of questions, other questions that are either obviously (to me) or at least debatably not pure cut-and-paste questions are also getting closed/deleted.

Are we closing too much? Probably.

Are we closing way too much? Probably not.

fbueckert's answer and its main conclusion are essentially a restatement of the Stack Exchange mission:

Lifetime, though, it looks like the closure/deletion rate is right around 2%. That makes it look like if the question survives the initial encounter and scrutiny, it's going to be around for the long haul.

Of course questions that survive initial screening will stay around for the long haul. That's the entire point of Stack Exchange: curating a durable, long-lived repository of quality Q&A.

Bit of a disclaimer: I am not a member of Chemistry. I have no stake in this community. I just like stats. I like seeing how numbers stack up.

The initial analysis rubbed me the wrong way when I first saw them, although I couldn't really put my finger on it at first. It seems somewhat suspect to compare how many questions were asked versus how many were closed or deleted; they don't tell the story very well; it just shows dips and spikes, without really telling you much about them.

So, what I did was create a running total of all questions, all closed, and all deleted. That gave me a decent idea of what it was we're looking at. 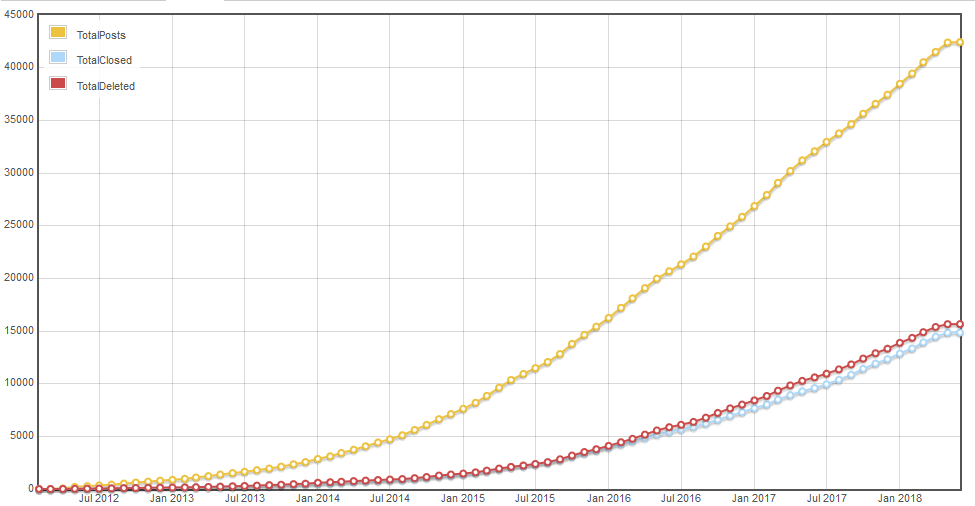 From there, it's easy to tell how many questions are actually eligible for closure or deletion; can't very well close or delete a question that's already there. 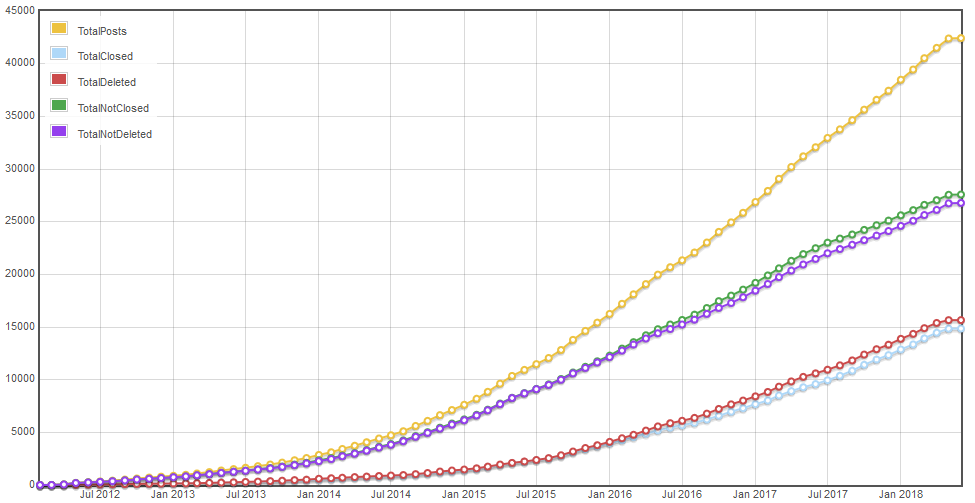 With the base query going, I could finally show some real stats. Here's what I came up with: 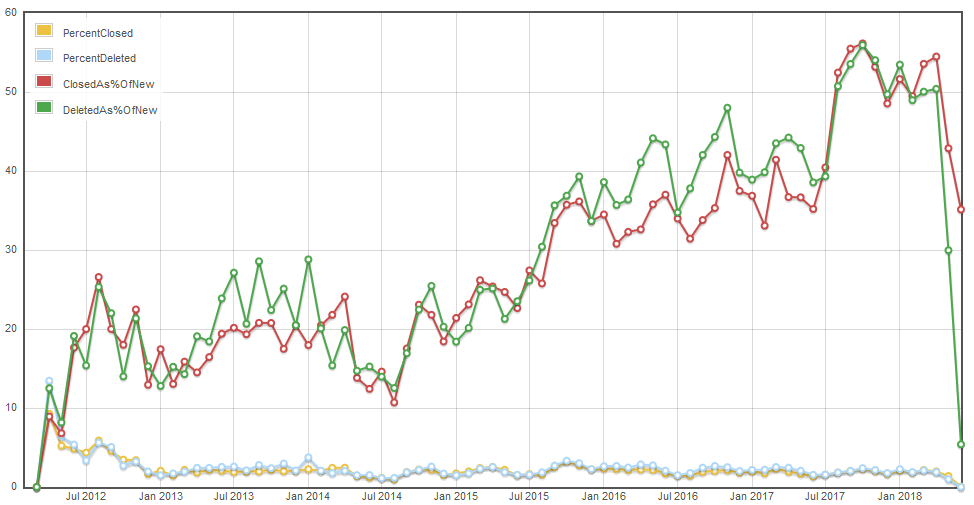 This merits a bit of explanation, so here's what each line means:

From my reading of this, it looks like about 50% of new questions get closed and deleted. Lifetime, though, it looks like the closure/deletion rate is right around 2%. That makes it look like if the question survives the initial encounter and scrutiny, it's going to be around for the long haul.

Whether that's good or not, I can't say; I don't know enough about your site to say one way or the other. For comparison, here's a couple other site graphs:

Physics
Math
Skeptics
And, of course, SO itself

I think I got the math right, but if anyone wants to double-check or see if I missed something, you can find the query here.

First things first: you fail to mention in your graph that each data point represents only the questions posted in that month! This is a rather important point, because the label AllQuestions reads as if it were total questions—which it is not.

If total questions were suddenly plummeting, I would indeed be concerned. But for your data I offer an alternative view: the significant valleys in all three curves occur predictably around July and to a lesser extent December. This is exactly the time when most northern hemisphere and western universities have summer or christmas holidays or low-intensity periods.

The site then receives a new bump in questions every time a term starts or exams draw near—whichever one it is. This pattern starts appearing in the second half of 2014 but doesn’t become strongly noticable until a year later.

For regular users of the site, they know this as the time when the homework wave builds up—and many lose their motivation due to the many, as penta mentioned, low-quality, zero-effort questions that we have to deal with and that form the bulk of the closed and deleted questions (as per my experience). Notice however, that the absolute number of new questions not closed or deleted seems more constant: the closure and deletion bumps align well with the new question bumps.

Finally, I want to draw the attention to the total question stats fbueckert posted. These show that after an initial exponential growth phase, this site is growing in a more linear manner. That can have a number of reasons but one rather reasonable assumption is saturation of the target audience. While exponential growth isn’t bad per se linear growth isn’t either. In fact, linear growth allows people to still get a rather good overview of what is posted with a relatively constant effort put in.

Personally, I don’t want to reach a state like StackOverflow is in where you are more likely to miss than see a question.

10
Dealing with unanswered questions
15
Do we need a list of questions/answers that can be ChemDraw'd?
6
Pinging in comment to suggest answering question
13
How to help OPs improve questions?