Should chem.SE use Georgia font?

The characteristic feature of this font are ‘text figures’, i.e. the digits having non-uniform height and/or baseline.

This leads to confusing typographical appearance of decimal digits. Consider a hypothetical question on H5N1:

The digits, which should be normal size, resemble rather subscript digits or something between, in this case; i.e. might be confused with a chemical formula.

(Please note that the actual text appearance can vary depending on the operating system and the browser state and settings.)

This is how this text would look at mother SO site:

It does not use this font:

I concur that georgia is suboptimal for our number heavy site; not to mention that zero and lowercase o look the very similar [0o0o]. I would prefer not to use \$ \$ to make numbers presentable.

Personally, I think Century would be a good choice but I've listed some fonts with nearly equivalent sizes for comparison (please no one pick calibri).

Per Ben Norris's input I have evaluated some of the fonts against the 0oO and |Il1 tests. As this is subjective feel free to tell me what I may have evaluated wrong. It seems Ludica and Perpetua pass the best, though I am still biased towards Century. 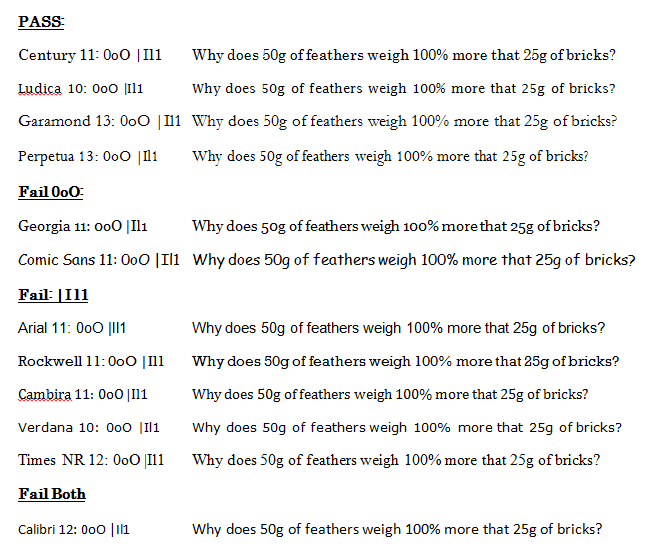 I'm not a designer nor I have a major in typography, so the following is a pure subjectivism.

I think that half-measures are evil, and attempting to fit subscripts in chemical formulas with the oldstyle/hanging numbers is a half-measure. The web is still crippled in typographic features compared to the desktop publishing systems, but it's not an excuse for a poor font choice. I call it poor because every time I see numbers in Georgia not lining up, "The Adventure of the Dancing Men" comes to my mind.

Some time ago I did comparison tables for the cherry-picked free and open source fonts alongside with the default fonts installed in Windows that don't look particularly ugly: 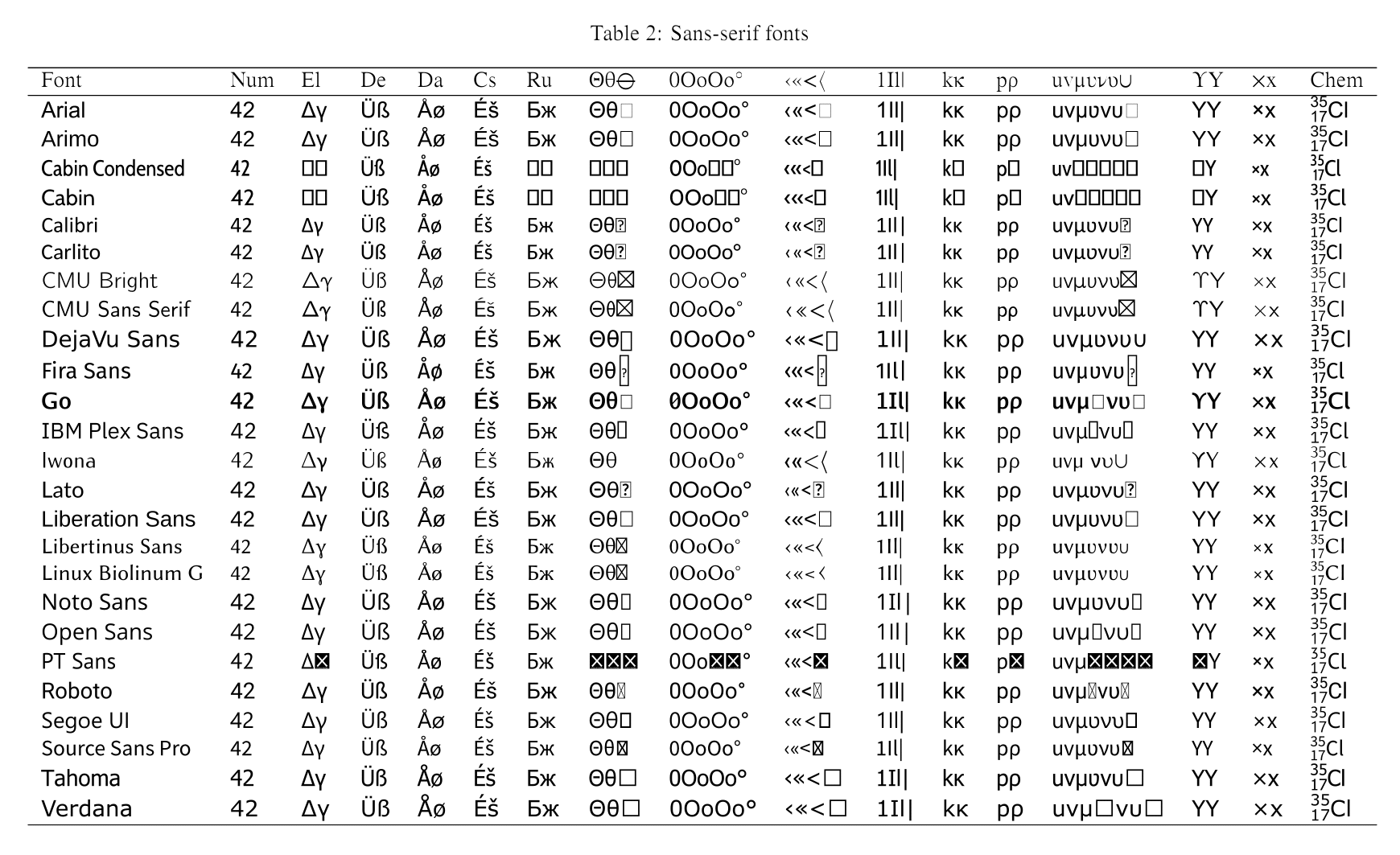 My main concern at the time I compiled these tables with XeLaTeX was to find the font that has better coverage for the symbols used by chemists and to find a font family of the sans-serif fonts where one can actually distinguish between I and l in chemical formulas (on the side note, I still think that choosing Arial as the default font by ACS for representing drawn formulas was a big mistake resulting in the urge to use lowercase letter "ell" instead of semantically correct lowercase "l": $\ce{HC\ell}$ vs $\ce{HCl}$).

Back to the main issue, as long as there is MathJax used, it feels like the main font should be a serif font to comply with Computer Modern (or its derivative) used by it. Among the serif fonts I personally find these three open fonts sticking out:

Also, Georgia font has very rudimentary ligatures support, and some titles are just painful to look at. The majority of other fonts do it better, and of course, the above mentioned fonts handle ligatures much better:

To sum it up: I think the numbers should be lined, serif font is better, and among serif fonts either STIX or Linux Libertine (or their derivatives, e.g. XITS or Linux Biolinum) would be arguably the best option. And no, I don't like Georgia [font].

I think the choice of oldstyle numbers was at least somewhat influenced precisely by the large number of numerical subscripts in chemistry meaning that plain-text typed H2O would at least somewhat resemble $\ce{H2O}$ even though it is $\text{H2O}$. However, I also think that after a significant time on this site the drawbacks become more obvious than the benefits.

Thus, I agree that ideally any scientific site should have newstyle number selection. (I forgot the technical terms for these numbers, feel free to point them out.) It would make many things more readable. As a (bad) workaround, I have often used simple dollar signs to turn oldstyle numbers into full-sized ones—a bad and unpractical solution.

When it comes to selecting a new font I want to propose: Select the font MathJax uses or one that is very, very similar to it! One of my pet peeves that I cannot do anything about is how different MathJax looks from standard text. For optic consistency, I prefer to enclose all chemical entities in $\ce{...}$ even when a simple inline text would be enough, e.g. when I’m talking about NaCl. If the font closely matched the one MathJax uses, that problem would be gone.

It's not the best choice, but I think it is preferable to what was before. You might want to check out the discussions when we got the graduate design, it's one of the points I mentioned: https://chemistry.meta.stackexchange.com/a/1673/4945

You can simulate how a sans serif font would look like still on a mobile browser. It simply doesn't match and creates weird breaking points in text flow. 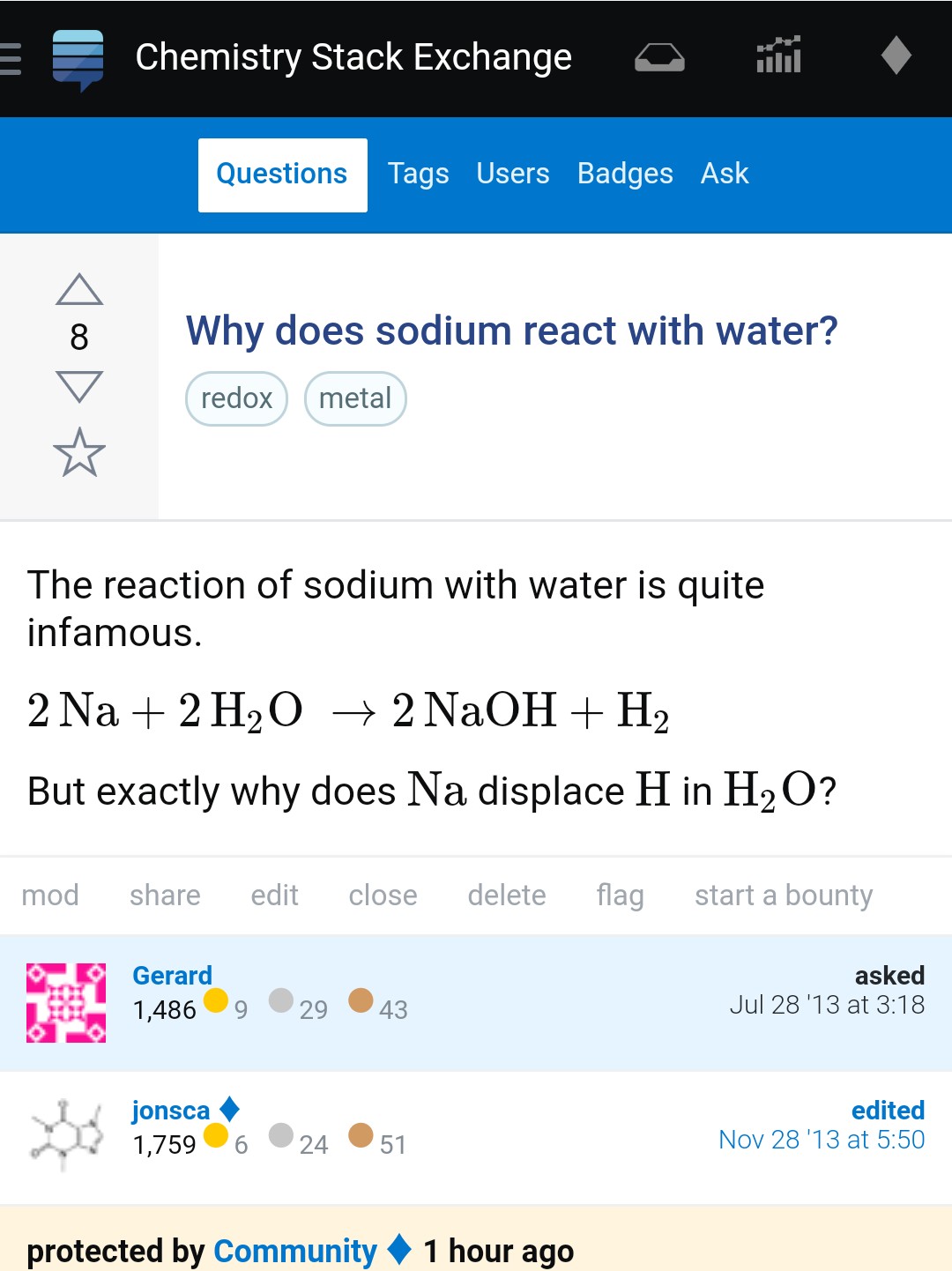 I personally prefer serif fonts, I find them better readable, but there are certainly points in favour of sans serif fonts, too. The important point is that text and chemistry (maybe even maths) should match and not create an imbalance. With all the awfulness of MathJax, there are drawbacks of what a site can look like, right now I think it looks okay-ish for most purposes. The numbers are something I also really dislike, but I can live with this; I wouldn't want to do back to that really awful mix we had before.

One answer that would be more broadly for Stack Exchange in general is to allow users to select the font they desire from a small list in the site settings. Of course there would be a default/recommended font but then that many more people could be accommodated.

52
Chemistry site design
7
Could we use a font where 'l' doesn't look identical to 'I'?

10
Chem.SE tag map
7
Could we use a font where 'l' doesn't look identical to 'I'?
8
Can we have a font that harmonizes with inline MathJAX?
52
Chemistry site design
6
Should we not use MathJax in Tag Wiki excerpts?
4
Quote box coloring, should it stand out more?
21
Someone is advertising car insurance on Chem.SE... should I buy it?