I do not understand well, why is so much preferred \mathrm to \rm for index formatting ?

(by occurrence and by user script formatting support.)

Note that I currently use LaTeX/MathJax only in context of SE posts. I have in mind mostly uniform text formatting and MathJax mathematical formulas. Advanced LaTeX documents with document text formatting are probably a different case.

If my understanding is correct, their effect is the same, but they differ in their default scope and delimiting syntax.

The \rm must be explicitly delimited, with \rm being inside delimiters.

\mathrm by default applies to a single character only, with \mathrm outside of delimiters {}.

This theoretically gives an advantage to \mathrm for single letter indexing.

But even in this case, the \rm way to create the source formatting code seems to me as more compact and in case of complex formula more easily to track mentally.

For 2+ symbol indexes, this mentioned advantage of \mathrm disappears, as {} delimiting is needed in both cases.

I ask, because if others apply intensive \mathrm formatting of complex formulas with many indexes, it may convert a relatively compact expression into a "huge formatted beast", difficult to be read and work with at the source code level even for its author.

Later editing of such a formula may be a nightmare.

One solution for me is to create 2(or 4) regex replace expressions to toggle \mathrm (or \rm) index "romanizing" to get the formula readable again for editing/reusing, and then toggle it back.

Some code examples are intentionally wrong for illustrative purposes:

\rm shouldn't be used at all as it's a deprecated command existing solely for the backward compatibility. Historically, the two-letter commands such as \it, \bf and \rm are the inheritance of the old $\mathrm{\LaTeX}$ 2.09 and AMS-$\mathrm{\LaTeX}$ 1.1 and are not the part of the current production-level $\mathrm{\LaTeX}2ε$ and probably will be dropped entirely in the upcoming $\mathrm{\LaTeX}3$.

There are two main reasons for not to use \rm from the perspective of a $\mathrm{\LaTeX}$ system:

\mathrm, on the other hand, only adds math roman typeface and is lacking all these limitations or \rm. As for MathJax, I don't fully understand the reason for keeping \rm, but it is there (compatibility with legacy version, maybe?), even though its usage is undesirable as it produces the code that is semantically incorrect and may cause potential problems in the future when MathJax receives a major update.

Speaking of code readability, I don't see any difference between \rm and \mathrm. $\mathrm{\LaTeX}$ syntax in general is considered cumbersome by many, but there is no sane alternative yet. If you are really upset with how the MathJax code reads on SE, you can use some text editor with advanced syntax highlighting for editing and writing your posts. Sure, you don't get instant preview out of the box, but OMG look at all these colors:) 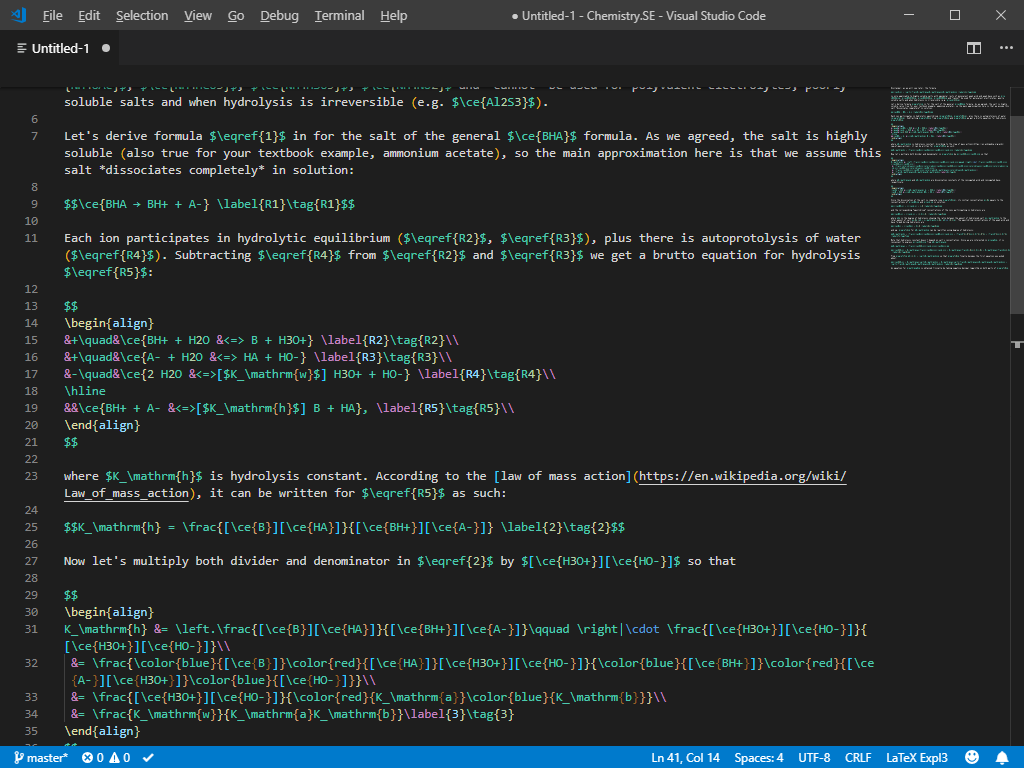 16
On formatting electron configurations
19
Editing gone wild
5
Bringing Helping Users Format Their Posts (HUFTP) to a whole new level
15
When editing posts that are consistently or overwhelmingly written in one flavour of English, please do not change the flavour
20
What additional formatting features are available to MathJax (possibly via \require{})?
15
About the scope of mhchem
10
Should chem.SE use Georgia font?
5
MathJax mhchem editor
6
Nonconforming MathJax example on the Markdown Editing Help page
5
How to compromise between performance and healthier formatting for a post?