What is the site consensus on what is a "good answer"?

A user answered a question, gave the formula to the poster, and left it to the poster to calculate the numerical answer. Moderator andselisk then cited the meta-post Hint answers revisited and indicated that the answer wasn't good enough. I don't remember that discussion, nor ever having seen any meta-post that defines what a "good answer" is.

From my perspective if the answer explains the principles needed to solve the problem, and derives a formula that is "good enough." Isn't plugging in the numbers and calculating a numerical result just mathematics?

Updated status: the answer has been restored by the OP and edited to include the calculations. Go check it out, it is an unironically good one.

I suppose it is about Help with two containers problem, Xenon. At the moment, the answer is deleted and is not visible to all users. For the sake of transparency and ease of fact-checking here is a screenshot of the relevant edit I was commenting on: 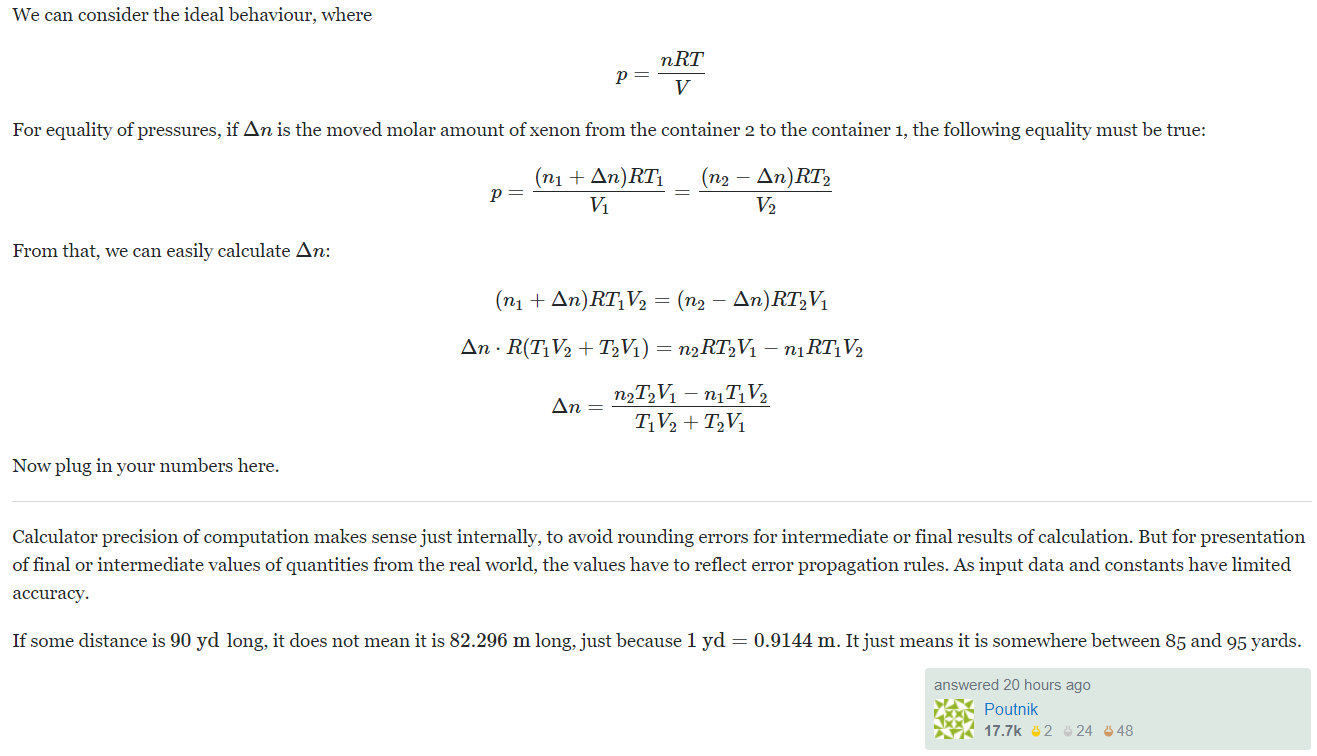 as well as the comments section, including the deleted comments: 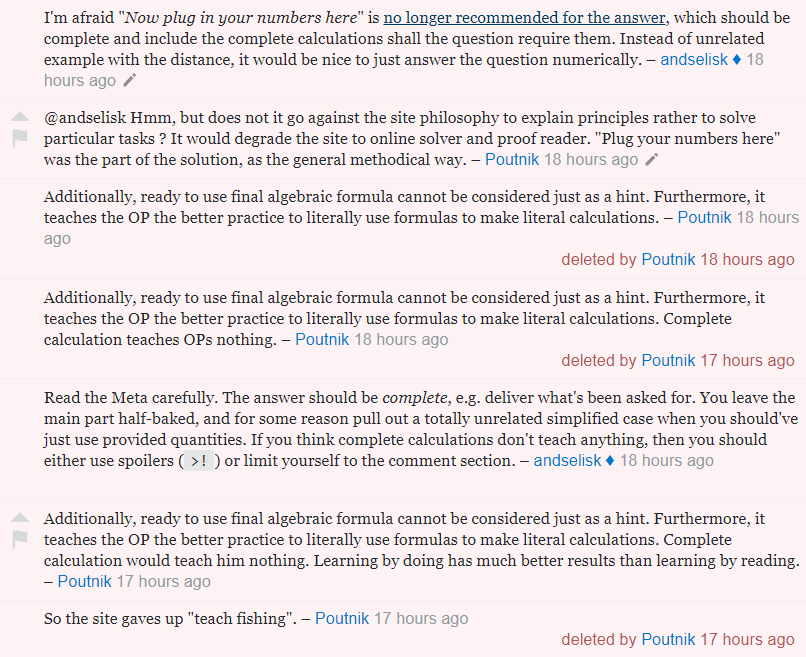 Help Center provides simple guidelines as to what is expected from an answer (emphasis mine):

Read the question carefully. What, specifically, is the question asking for? Make sure your answer provides that – or a viable alternative. The answer can be “don’t do that”, but it should also include “try this instead”. Any answer that gets the asker going in the right direction is helpful, but do try to mention any limitations, assumptions or simplifications in your answer. Brevity is acceptable, but fuller explanations are better.

Don't you think that the expected full answer for a question

How much Xe do we have to transfer from one container to another so that the pressure in both containers is the same?

would end up with a physical quantity and not a formula?

could be a fair interpretation of my comments, but this was not my intent. The issue I was focusing on was is not that the answer is good or bad; rather, whether it is a complete answer or not.

The answer was overall positively received (4+/0−), and the only drawback was the lack of completeness in terms of providing what's exactly been asked for. The last effort of plugging in the numbers and demonstrating how to handle significant figures would immediately resolve this issue, but instead of correcting the answer OP decided to delete it, the decision which I truly don't understand. Referring to the last comment, it's a shame seeing fish getting off the wise fisherman's hook.

I believe OP acted in good faith and strived for best pedagogical practices, which, I believe, could also be followed by using spoilers for the final answer. Also, since the questioner demonstrated gaps in knowledge of numerical analysis, it would also be beneficial for the them to peep for once the solution to the problem; that is, a competently written one.

Clearly, this question is about a specific answer and a specific case. Let me offer the shortest answer to this specific issue.

The "site consensus" which you seek is laid out in Hint answers revisited. I quote:

Please ensure that your answer contains - at the very least - the final answer to the question, as well as the thought process leading to it.

I think the meaning of this line is clear enough, and I think it also justifies andselisk's point. It is also a stance that I personally (as a user) agree with — after all, that was my meta post.

The followup question is presumably, "how is this the consensus"? Well, we had been debating this issue for a while on meta and in chat. I put it up on meta, and I said that if you disagree please post something. This is how discussions on meta work. It was not an announcement of an impending policy change, it was a proposed policy change. Nobody told me they objected then, so we went ahead with it.

But one should bear in mind that, prior to this, the policy was quite literally the opposite: just give hints, nothing more. And we changed it, based on discussions that were ongoing at that time. This means that it can be changed in the future. The process is simple. If you disagree with it, make a fresh meta post, and the community can decide, by their votes.

I know I personally would not like to change it, but my vote counts for no more than anybody else's; and furthermore, it may not be a bad thing to have a proper discussion on this one specific issue, of whether it is really necessary to plug in the numbers and solve it (as opposed to a broader discussion about "what constitutes a good answer", to which no objective answer can be given, but merely a set of guidelines as Karsten's answer lays out well). As I indicated in the comments, although I personally believe the quoted policy is still applicable here, there is probably some room for debate, because it was not entirely directed at answers like the one here.

The hint answer thing is relevant, but perhaps is being stretched a bit here: it was meant to get rid of completely useless answers, the sort of thing that you might nowadays see in the comment section, e.g. one-liner answers like "HINT: What orbital is the outermost electron in Na in?"

The issue at hand is whether it is always necessary to give complete answers, or whether there is value in getting the OP mostly there, and then leaving it up to the OP to "bring it home".

I personally very much liked Poutink's "teach a man to fish" approach here [1]. In this particular case, I thought the OP was much better served by being provided the equation, and then left to plug in the numbers on their own, rather being provided a complete answer. I.e., I think this OP would have particularly benefited from that exercise. My only suggestion for Poutink would be to have made his pedagogic approach explicit to the OP (or maybe he did this and I'm forgetting), saying something like:

"Here's the equation. I think it would be a good exercise for you to try plugging in the numbers on your own, being careful to both keep track of units and follow the significant figures rules explained in the comments. When you're done, let me know what you get in the comments for the numerator, denominator, and overall, and I'll let you know if it's right or if you need to try again."

Or even just: "I've left it as an exercise for you to plug in the numbers on your own."

Indeed, I've followed that pedagogic approach in some of my own answers. E.g., here I only corrected the error, and indicated to the OP I was leaving it to them to rework the derivation on their own: How is the formula of mean activity coefficient derived?

Granted, the OP only asked that the error be identified, so I suppose you could say this case is different b/c here merely correcting the error did represent a complete answer. But the point is that my philosophical approach was the same as Poutink's.

Here's another instance in which I gave the person guidance on how to figure out the answer on their own, rather than doing all the work for them: Combound with pressure sensitive melting point at moderate temperature and pressure?

MaxW also asks, more broadly: "What is a 'good answer'?" I think the characteristics of a good answer depend on the nature of the question.

If the OP is confused about something, the best answers are those that are able to "see into" the OP's question, determine the essential source of their confusion, and craft an answer that directly addresses that confusion. Often this requires going beyond the OP's literal request, since the OP may not themselves realize the fundamental source of their confusion—i.e., they may be asking about concept A, not realizing the reason they're confused is that they have concept B wrong.

If the question is more general, the best answers are those that, while addressing the OP's request, go beyond that to serve as a nice reference on the subject for the community as a whole.

It just snowed in my town, very calming. Everything is covered in a smooth blanket, and life slowed down as folks contemplate staying inside a bit longer before they start shoveling.

Back to the topic at hand.

What is the site consensus on what is a “good answer”?

Mostly, the mechanisms put in place by Stackexchange make it that we don't need a consensus. If the OP of a question gets an answer that is useful to them, they can accept the answer. If they are frustrated with an answer, they can add a comment or edit their question to clarify what they wanted to know and couldn't figure out.

If a third party does not like an answer, they can ignore it, down-vote it, or write their own answer. If they like it but feel it contains a typo, they can fix it or mention it in the comments. Once it is fixed, they can remove the comment.

All nice and calm, like thick snowflakes falling slowly from the sky. And then your neighbor starts the snowblower and throws the snow and slush on your front yard.

When things get a little agitated on this site, it usually involves perceived exploitation of, or disrespect for, the expertise that folks share here voluntarily. I think the best way to answer an interesting question that screams "homework" is not at all, or after the deadline has passed. In the meantime, use the comments to probe what the OP is able to do, and how they could improve their question to make it less "homeworky".

What is the site consensus on what is a “good answer”?

I can say what I feel my best answers accomplish: They answer the question the OP posed, they address all the misconceptions in the question, and they have further reading in the form of links within the site and citations to other sources.

12
Are hints more appropriate for comments or answers?
17
What *is* a 'homework question'?
14
Encouraging better questions: the topic challenge
13
Meta: too much talking, too little action, and a proposed solution
14
Close Votes Aren't Super Downvotes
15
Hint answers revisited
5
Would a "common reference" close reason make sense? Why or why not?