Do we appreciate questions?

Looking at the question feed on the main chemistry site today, it seems like more than two thirds have a negative score. Have the questions gotten worse, or have the voters become more critical? Or is there something else going on?

Maybe we should have a week where everyone considers adding a comment if they think a post can be improved (I just learned from @andselisk's comment that users with less than 2K reputation get a prompt to this effect when they down-vote). It must be discouraging for folks who have questions, even when they do their best to ask them in a way that follows all the rules and customs of our site.

I found a SEDE query to check monthly upvotes and downvotes. Here are the results. February 2021 looks like an outlier, even when seasonally adjusted: 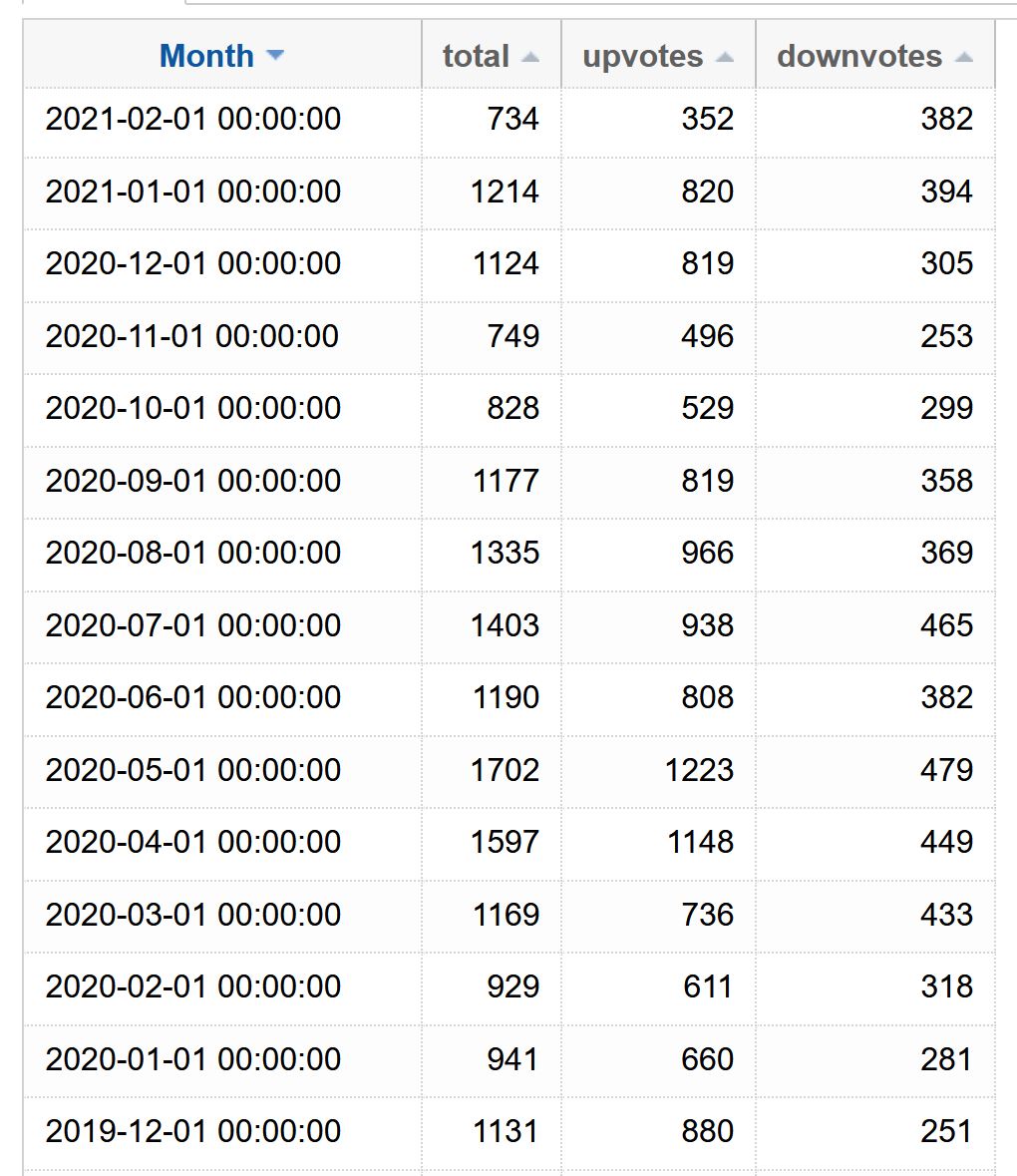 Re andselisk's comment: I agree that talking about individual cases helps to elucidate possible recurring problems. However, it's impossible for us to exhaustively explain downvotes/close votes on every question, and honestly it gets tiring after a while; and lately I've been feeling increasingly uneasy about the possibility that by focusing so much on specific cases, we may inadvertently be denying the existence of a systemic problem.

I brought up a similar issue before, about closure rather than downvotes: Recent close statistics. The gist is that more than half of all questions get closed, which I couldn't (and still don't) see as a sign of health — although I realise that a lot of commenters seem quite fine with it. For what it's worth, that was 3 years ago, but today the close rate in the last 90 days stands at 51.52%. I can't help but feel that if we attract so many questions that we don't like, then we're attracting the wrong crowd...?

One difference, though, is that closure (usually) needs 5 people. On the other hand, downvotes rarely hit −5, except for the worst of the lot which I presume is not the type of question we are interested about here. I wonder, then, whether one possible explanation (or part of it) is that we're seeing some kind of bias, where many questions are actually "borderline" but people who want to downvote simply have a greater inclination to do so than people who want to upvote?

If that is the case, then there is a potential answer which is simple to state though not necessarily so simple to execute: let's be more generous towards questions. If we feel that a question is not yet worthy of an upvote, let's not instinctively downvote it, but instead let's edit it into a state where we think it is.

I think many of us (myself included) tend to focus too much on OP's efforts, thoughts, writing, etc., when in fact this is secondary to the raison d'etre of Stack Exchange: Q and A. If there is a good question lurking inside, we should seek to bring it out. Yes, it's far easier to open a question, tut, click downvote, and move on; but putting in the effort — even for just one question a day, or one a week! — will lead to better questions and a healthier site, in my opinion.

While I like andselisk's idea of monitoring questions for a given time-period in the future, I am afraid I tainted the sample with my meta-post (not a bad thing, though). I collected the questions asked up to about 24 hours before my post, together with the current score and some thoughts about the nature of the questions through my eyes. Now that some time has past and more than one vote per question has been cast, there is a bigger range of scores, perhaps reflecting the quality of questions better.

If I remember, I could come back in a month and see what happened to the questions (did they receive answers, comments, were they closed or deleted by the OP to protect their reputation points).

For now, I have comments on two of the questions. If we look at this question, it suggests a fundamental misconception about ionic compounds, and a lack of understanding of spectator ions. If the question title could be edited so that others with the same misconceptions could find it, it would be nice to have an answer. I did not check whether there is a nice question with a canonical answer on ionic compounds, ionic interactions and ions in solution that would allow this question to be closed as a duplicate.

The questions about significant figures are a bit painful for me to read (e.g. this one) because time in the chemistry classroom could be spent learning some chemistry rather than learning rules that have to be unlearned once you look at real data. Again, I wonder if there is a canonical Q&A that shows the uses and limitations of the "General Chemistry Textbook significant figure rules". You would think if I divide a number by 2 (or 2.00000000000) and then add it to itself, the number of significant figures should not change. Yet half of 1.20 supposedly is 0.600, and the sum of 0.600 and 0.600 is 1.200, e.g. I gained a significant figure in the process.

So I guess I will try to pick one or two of these questions, look for duplicates or relevant existing Q&A, and write a comment or edit the question. Or if there is nothing to point to, write an answer and edit the question so others can find it more easily. All of this takes time, of course, so it makes sense to be selective and just leave the other questions for someone else.

Here is what happened within a week (SEDE query): Six out of the 20 questions were closed, seven of them have at least one answer, and one rose to the top with the most view and upvotes. 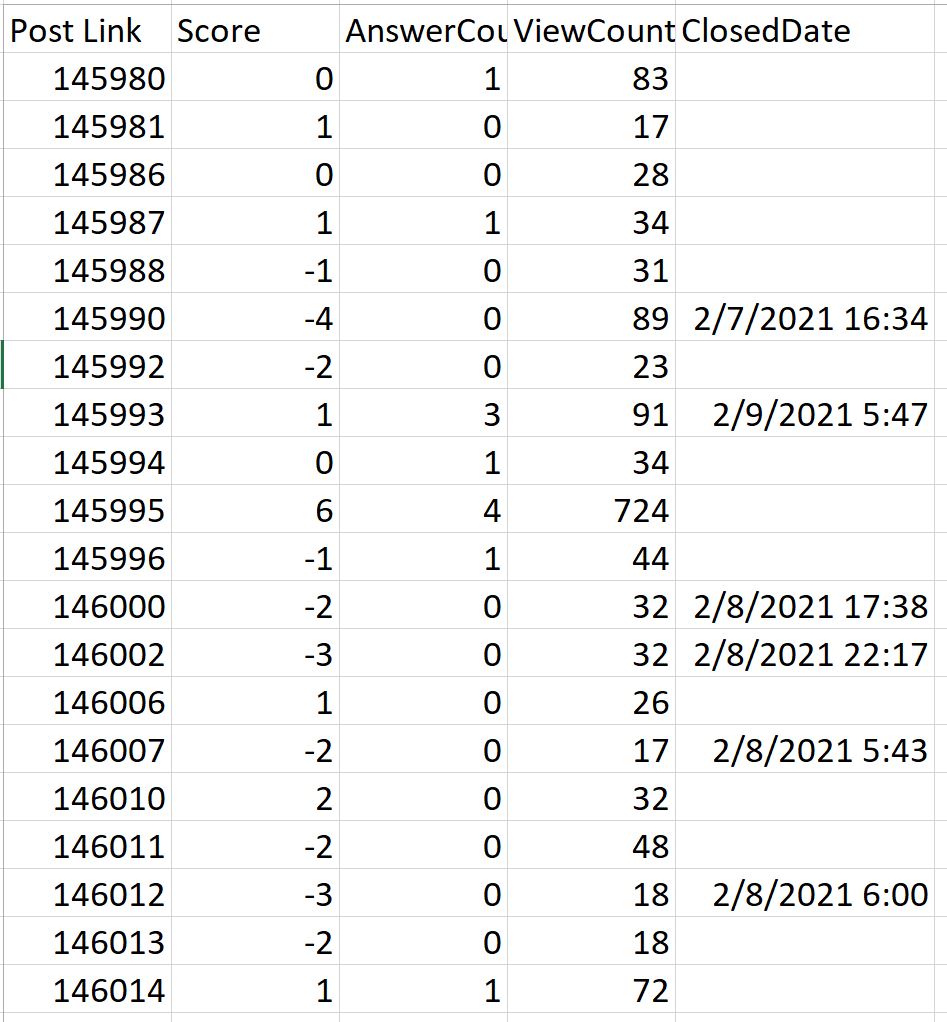 Following up on Karsten's SEDE query, the following is a plot of the fraction of votes that were upvotes, by month. 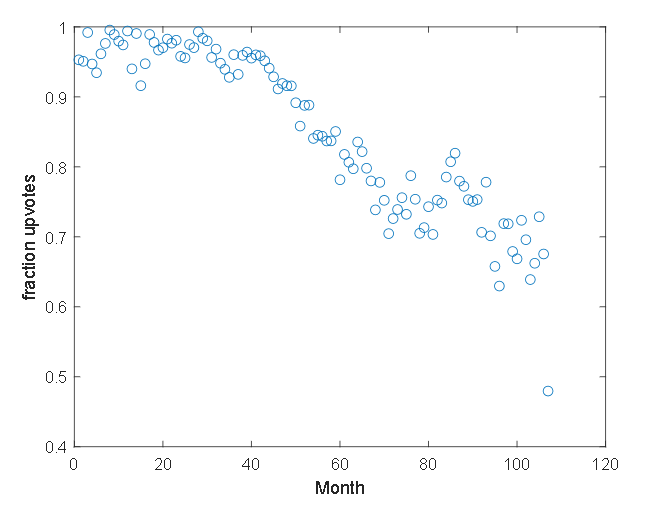 There isn't anything enormously surprising there. I would not expect the fraction upvotes to hold steady. It would be interesting to compare this data to the frequency of close votes. 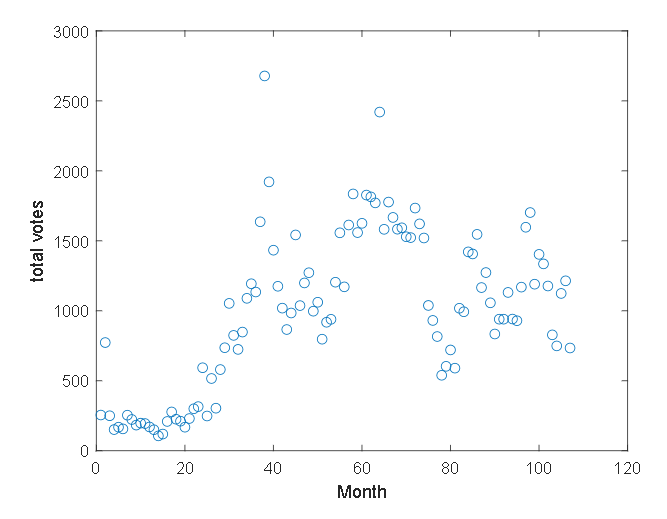 Interesting is the large fluctuation from month to month, but the long-term average appears otherwise relatively steady.

I have concluded* that there are serial downvoters on the site. However, I have also concluded that serial downvoters are not necessarily pathological. The site encourages downvoting, in part because original questions become increasingly rare (at least the types of questions that are most commonly posted) and because of an excess of lower quality questions (those exhibiting minimal effort, going back to that precious term). Downvoting may be a useful reflex (see also voting as a duty below). Serial downvoting is therefore not entirely surprising.

More worrisome might be that bad actors who downvote out of spite are difficult to identify or block, and have a potentially outsized effect because of low vote counts. The problem is one of participation. Views for a question can reach 100+ within a few days, even without a question being broadcast to other sites on the network, but more usual numbers are <50. The number of people regularly voting to close and up-/downvoting are probably on the order of ~10, so cumulative votes hover around 0. Vote tallies are in general small because few people bother to vote. Question is whether most abstain because they don't care, don't have the time, or because they prefer not to cause unintended effects based on limited information.

Close votes are also decided by a dedicated cadre of fanatics. It is difficult to say whether they should be applauded or not, because to function the website needs people to perform these duties, but on the other hand leaving the fate of many questions to a small number of people cannot be good for the health of the site. Ideally a lot more people would participate in all voting activities.

Searching among heavily upvoted and unanswered questions also suggests additional explanations to voting patterns. Many heavily upvoted questions are very challenging to answer except for experts narrowly focused on very particular topics. This has multiple effects. The absence of answers for some difficult questions discourages participation. This further dilutes the number of good questions. In addition, the absence of "research-grade" questions can lead to a myopic reaction in which being answerable becomes equated with low quality or duplication.

Karsten's announcement that he is planning to deliberately increase his voting rate is perhaps a step in the right direction. In addition to reducing the statistical utility of vote tallies as measures of question quality, there might be a deflationary (cyclical feedback) effect involved in low voting rates. However, there are alternative ways of looking at this, for instance considering the "tragedy of the commons", in which some don't vote because they don't feel the need to. It makes for a fascinating topic of discussion. In the end a little common sense (such as remembering the "golden rule") and a friendly attitude is likely to benefit the site more than any profound analysis.

OTOH I think there need not be a rush to upvote or downvote in the short run if not convinced that a question is particularly good. The site does a good job of pooling opinion when questions are in fact liked, and in the long run popular posts do accumulate more votes, as it should be.

*(ok, I suspect) On various occasions (times of apparent low activity on the site) I've noticed many recent questions being downvoted - some not (imho) seeming to merit downvotes - and none receiving upvotes - even when they seemed to merit them.

I think this question is somewhat equivalent to asking "do we appreciate questions from new members", since I'm guessing it's the new members who most typically ask the questions that get down-voted and/or closed.

[Aside: Can Karsten's query be filtered to look at downvotes for new members (say, < 1month and/or <200 rep, or however you choose to define it)?

16
Recent close statistics
4
What is wrong about my answer?
0
Why was this question downvoted?
-6
Regarding anonymous downvotes
1
frequent closure of questions as "off-topic" that do not seem to meet the published off-topic criteria
-1
Downvoted without reason
-4
Why was my question closed?
0
Fallacy in my argument, reason for getting question closed? How to improve my (another) question? Why did I get half the bounty amount?

43
Let's do the bounty dance!
28
Please exercise your votes
19
Should we delete and blacklist [reaction]?
14
Close Votes Aren't Super Downvotes
13
What is our target audience, today, in 2022?