Why did activity on Chem.SE decline rapidly in the last few years?

While searching for a "duplicate" question, the only post I found worth mentioning was this one: Decline in activity which shows a "peak" in 2017 followed by a decline until 2019 (which is when the post was written). What I have noticed is something slightly different, since I was looking at questions/day as archived sporadically in the months of August (or the closest snapshot to August) each year on the WayBackMachine. I actually see a rise in activity from 2018 to 2019 and even 2020, but then a rapid decline from 2020 to now.

Using the same archived pages as above, it might be useful to compare to SO and other science SE sites, so I will do that below.

When looking at earlier months of 2020, it is apparent that there was an increase in SE activity overall during the first few months of strict COVID-19 related lockdowns (e.g. in March to July 2020), if we remove that factor which might have inflated the 2020 number, what we're seeing is a decline in activity from a "peak" of 23 questions/day in August 2019 to a trough of 11 questions/day in August 2022 (somewhat ironically since the only related post I found, which is the one to which I provided a link at the beginning of this post, observed a "peak" in 2017 and a "trough" in 2019). I'm aware that SE got in a legal dispute with a diamond moderator later in 2019 which caused many diamond moderators to resign, but I'm asking if anyone might have alternative theories or supplementary or complementary theories regarding the decline in activity here from 2019 to now.

The second table suggests that other sites have experienced this too. Maybe people left scientific and technical jobs during the pandemic? That doesn't explain why fewer questions from students would be asked though.

It's interesting that the effect is network-wide, which actually comes as a bit of a relief to me. Anyway, let me share some musings -- please don't read too much into it, it's just something I've thought about for a while.

Basically, I wonder whether this is somehow kind of natural. Most Internet communities, even social media platforms, seem to have a finite lifespan. In the case of SE it seems to be like this -- at the start you have a core of dedicated users who invested time into developing the platform, and the userbase slowly grows as people think "oh this is quite cool". But as the original core users leave the activity slowly dwindles and people move on to the next thing. The Monica situation may well have been a catalyst too.

Maybe it's just confirmation bias on my part, but I think a lot of the original 'power users' of Chemistry.SE have left, or are just inactive. I hesitate to include myself in this category (because I joined quite late), but the graph of my involvement definitely peaked a few years ago.

By the way, this not only includes main site, but also meta. I think that meta has been stale for a while now and I'm personally not sure if that's really a healthy sign of a community (hence my submission for the election questionnaire).*

Take this with a giant pinch of salt, though. It's possible that I'm just projecting my own experiences onto others......

* I hope that me saying this won't influence any nominees' answers. My opinion is not really worth much.

Here is the graph from the referenced 2019 post, updated to the currently available data: 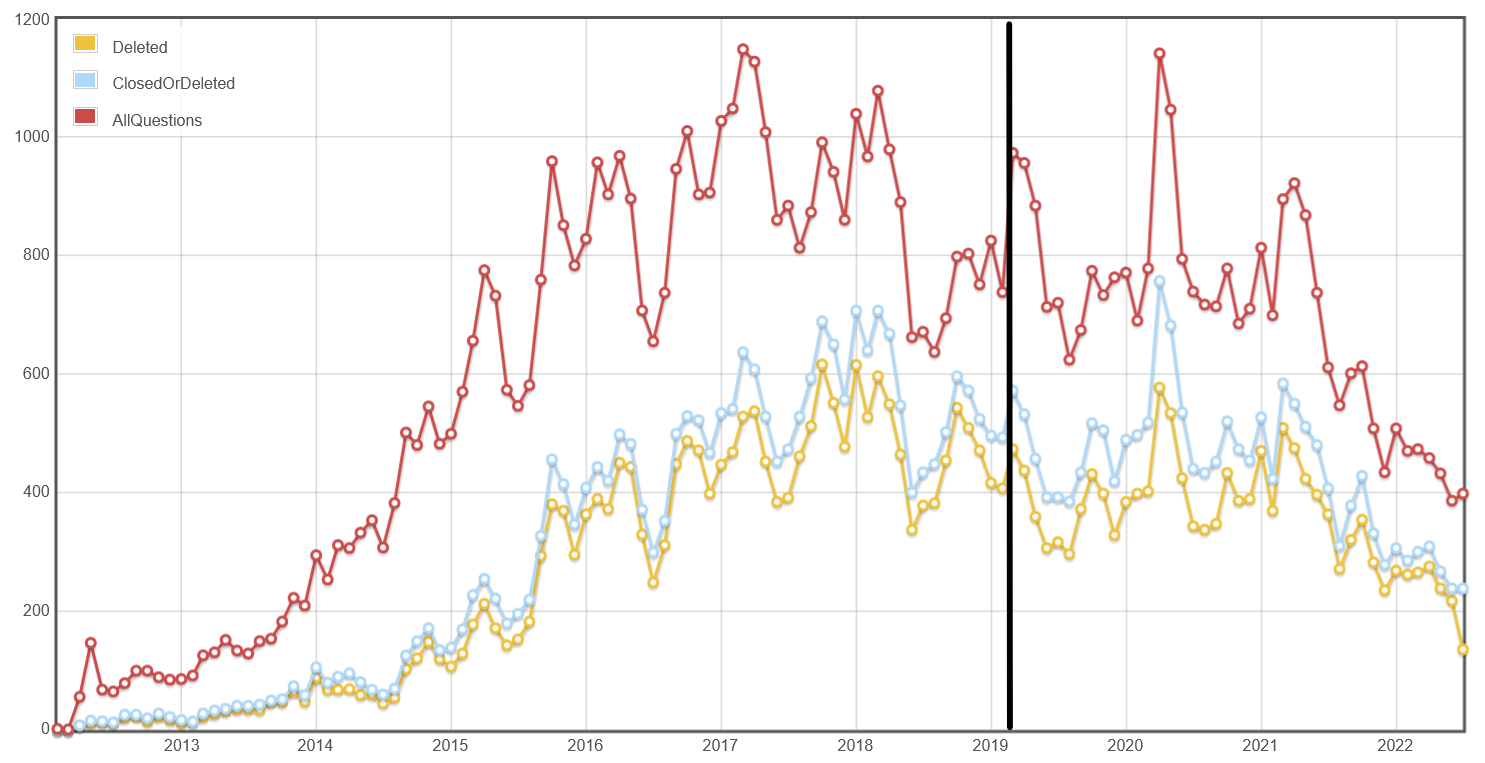 From my own teaching experience, I learned there are now commercial sites dedicated to cheating. It is possible we are getting fewer attempts at getting answers to homework or exams on StackExchange Chemistry. This would not be a bad thing.

I do think there is a saturation of questions you would ask for general chemistry on our site. This is one goal of the site - answer all questions that folks might have. In fields like computer science, there are new languages and even new disciplines (data science, artificial intelligence). In introductory chemistry, there is less change, so there is less need to ask new questions instead of just looking up old questions.

Here is a list of the current four most-viewed questions:

(They are mostly physical chemistry because this lends itself to general questions rather than asking about a specific substance or reaction in - say - organic chemistry.)

More than 2.5 million people figured out how to get an answer to their question without posting another version of these questions.

When I google "maximum number of electrons in each shell", I get an answer from the BBC first, and then answers from eight different Q&A sites (including a link to the StackExchange post). So there are a lot of choices that potential question posers get exposed to.

From the graph, you can also see that the numbers have large short-term variation. If you just take August numbers (or worse, near-August), you are getting a lot of noise. However, the overall conclusion that the number of questions has declined since a peak sometime around 2017 seems correct.

We have some very knowledgeable regular ("core") participants, but their focus is mostly on answering (and it's great to see the great answers they post btw),as well as editing, commenting etc. There are gems among these questions and answers, but questions from "core" users are less frequent.

The core users referred to in orthocresol's answer were not responsible for the bulk of questions posted during the peak, unless that base or individual participation expanded significantly up to 2016. Much of the waning participation since the peak of 2016 reflects changes in the number of questions, probably due to changes in usage across the internet as a whole and specifically the rise of other platforms competing for attention. Why users might choose other sites, and whether that is sometimes or often a good thing or not remains to answer. Given the goals around which this site is designed, that might not be a bad thing. We might want to focus on quality rather than quantity.

This is not a fully digested answer, I also recommend adding a little salt. On the plus side, some of the statements can be tested more rigorously using database queries, and it would be cool to see more such information reported.

I can't speak for everyone, but I will conjecture it is, in part, the culture here. It went from a place to ask and answer questions freely to a place to be scrutinized at every angle. Members of my Facebook group no longer like to participate here due to the negativity on this SE site.

I can't name anyone in particular because I'm awful at names, but it seems like we're missing people who were here years ago that made the site worth using.

We used to mark questions as homework questions and shut them down when they showed no effort at all. When some effort was shown, we would walk them through it kindly or close it for being a duplicate. It now appears that we close them for being vague even when it's clear what the user is asking.

"Why did everyone downvote my post" is a type of question that regularly appears in meta, but that's not really a new occurrence.

Not accounting for a drop in use over the years, but more recent development is that Chem.SE usage has tanked. We used to receive a rough average of 30k views a day but now receive less than 10k. (I'm just eyeballing this.)

This is a significant drop. I can only conjecture that this is due to Google search viewership as other sites have tanked due to a change in the Google search algorithm that roughly corresponds with the date our stats dropped. My goal as a moderator has always been to improve searchability by making improvements to questions as misspelled or poorly written questions and answers can actually harm a site in search results. I believe there needs to be an increased focus on making the content our site offers as nice as possible.

TL;DR: Polish the turds. Don't just write beautiful answers to questions. Make the questions look like they were worth your time answering.

The policy by moderators and the allowed behaviour killed the site.

I have been active on pretty much all the high stem SEs: Mathematics, Physics, and Chemistry. I'd say roughly speaking, mathematics is the most lenient, physics is the middle and chemistry is the least lenient. I mean, of course, the type of questions considerably acceptable in MathSE is entirely different from that of PhysicsSE or Chem SE but besides the point.

Of course, it may be that the different types of questions the amount people caring about quality of post vs quality of actual content is different, but I asked most of my questions when I was in HS, so I think it would be a good representative of the experience of a person at that level.

Now, have a look at the questions which I got upvoted on ChemSE, it seems to me the questions that got upvoted are of type "help with technical calculation on specific step". I believe these questions were upvoted mostly by people studying for JEE exam (an Engineering exam in India) and any negative reception that they got was from everywhere else. For instance, this question got closed after initially posting and it was reopened after much effort from me.

And it's usually so that the most upvoted questions here are of this type. The issue is that a broad audience doesn't really care about these types of problems much. For instance, compare the views of the type of question I ask on PhysSE vs ChemSE: 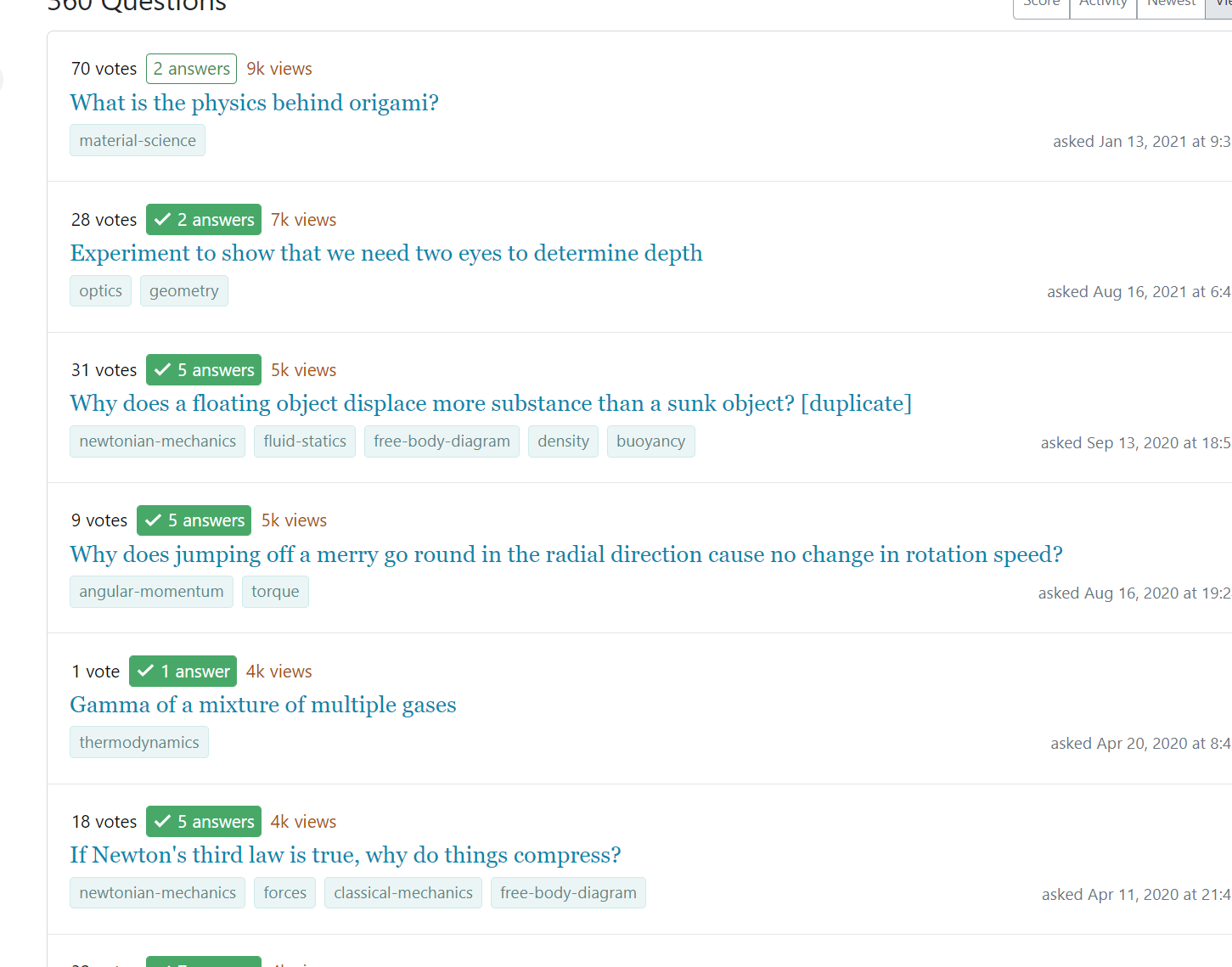 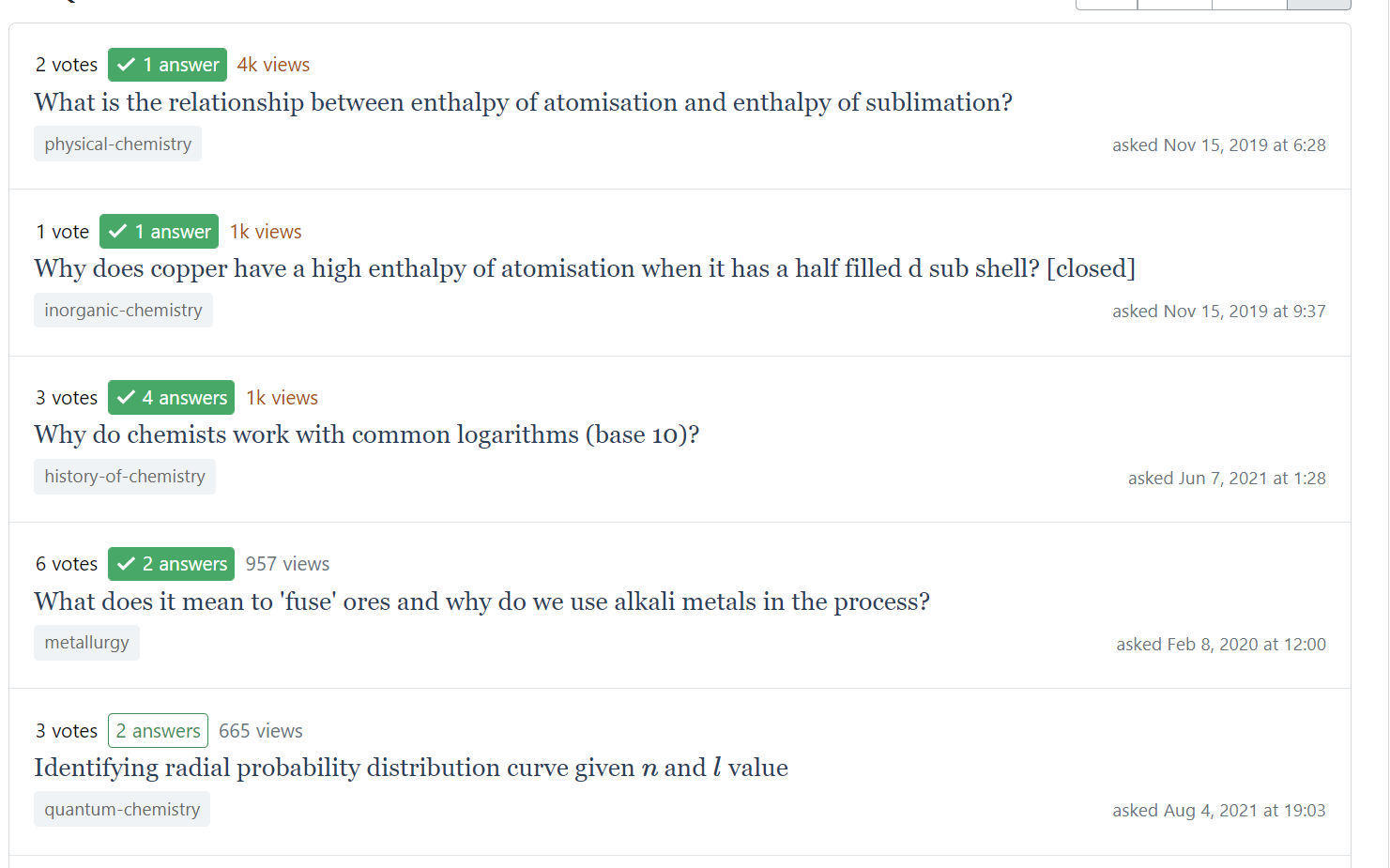 Of course, there are about 900k Indians writing this exam per year, so it looks like a large population of users can be derived from India but at the same time, only 10% of Indians speak English/ 65%-ish have internet, so tapping into the full potential of this pool within the SE framework is not possible.

Here is an example of me trying to ask a type of question that may get popular on PhySE here. Initially it was downvoted to death and I think closed few times before finally opened.

Tl;dr: For gaining users, need to allow questions that actually attract the attention of people to thrive. For keeping users, it boils down to what type of behavior is allowed on the site.

The selfishness of a few users who wanted to rule a personal SE site for themself made this site inhabitable for anyone else.

How are the other SEs faring?

MSE and PhysicsSE are suffering a similar decline but for very different reasons. Their decline is because all the new questions which are being asked are found to be dupes of old ones. Since PhysicsSE policy was so strict before, their first line of defense was to make the policy less strict and be more inclusive of the type of questions that can appear.

MSE I think so alleviated the problem by explicitly allowing people to post their own solutions for problems and then ask the community for feedback. And, I don't think this really does any harm because most of the important and general questions have been answered.