First, congratulations on the upcoming graduation of your site!

My name is Kurtis, and I'm the Stack Exchange team member who will be working on the design for your graduated site.

I've read your suggestions regarding site development and ideas for common molecules as well as this discussion about Chemistry site graduation. Thank you for getting the ball rolling! These ideas will come in handy as we begin the design concepting phase. Feel free to add more logo and site design ideas to this post, and we'll keep them in mind as we move forward!

A couple questions as we begin the design:

Please choose a serif body font that doesn't make Mathjax like $\rm SO_4^{-2}$ scream when embedded in a sentence. Math SE does it right. (Can we have a font that harmonizes with inline MathJAX?)

The font should also clearly distinguish between l and I (lowercase ell and uppercase letter "eye").

General design in my idea:

My vote is for a clean, minimalist approach to the color scheme, logo and the design in general. The logo might be an element symbol in a square, like a block from the periodic table, or it could be some iconic chemical line structure.

I'll throw a few more ideas out there. The beautiful thing about chemistry is that there are a lot of images and themes to draw from. Happy designing!

I've thought about the logo a bit, and it's a difficult task because the "Hot Network Questions" requires a very small logo. Personally, I like either a test-tube or flask:

While I might love a molecule, to other non-chemists, these are immediately recognizable as "chemistry" even at small size, which is important.

I'd definitely favor a clean feel. (Maybe I should say like a "perfect dream" lab, since real labs tend to get messy over time.) I think these sites tend to hold up well and attract return audience. :-)

I think the periodic table has been so iconic that the letter surrounded by a box speaks pretty clearly. (I'm thinking of Breaking Bad, but also all the dozens of t-shirts and greeting cards and everything else that spells out words with element symbols in boxes.)

I'd also love to see a smattering of symbols representing the history of chemistry, from alchemy to modern graphene and 3D molecular graphics... with beakers and test-tubes around on a lab bench.

First off, there's something you probably already know, but it's worth re-stating. There are two different ways of displaying molecules on-screen. There's the 2D line-art style: 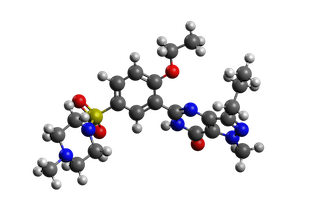 I'm a bit biased, but Avogadro is open source and generates some pretty nice 3D graphics. You can load pretty much any molecule with File -> Import -> Fetch by chemical name.

There's a lot of good 2D depictions on Wikipedia too.

I'm not sold on the idea that the vote buttons need to be "chemistry" but the closest for me would be "spin up" and "spin down" electron arrows:

When you just search "Logo Chemistry" in the google image source, you will see, that the most common elements are

Personally I always favoured something along the line of $$\Huge \fbox{$\ce{^{12}_{6}C}$}\text{hemistry}$$ (Just imagine the rectangle to be more of a square.) But this kind is so heavily overused, that I would not recommend it. In the hot questions list the logo is so tiny, that the numbers will blur to dots. (Also it riminds me a lttle bit too much about breaking bad.)

The Erlenmeyer flask is one of my personal favourites. However, I'd really like to see also the aspects of a more theoretical approach. Something like the following

Just so you can imagine a hot question:

Why is gold golden?

It is really very tiny, so I am not really convinced about that any more.

Also a simple $\huge\color{\green}{\checkmark}$ should absolutely suffice for the accepted answers.

And I almost forgot, as long as we get rid of that grizzly, wizzly, pastel blue background banner, I am completely happy.

About the general design:

I believe that almost all of chemistry.SE visitors are either users who visit frequently or who come from search engines and such.

I really vote for Fred's idea for a simple yet elegant design. "Clean", as you mentioned. @JohnSnow recommended in a previous answer of his to have included Bunsen burner as the sign of the acceptance of an answer. I really liked the idea. Mainly because I think the red flame is a really "distinguishable" indicator, especially for something important like accepted-answer.

You are the designer and you know what looks the best in here. There's a degree when visitors will get tired of so much fancy designs, and being overly simple won't catch an eye. Badges I think, are best to be simulations of Gold, Silver or Copper bars. (As mentioned earlier, there's no intention of "making copper bronze", and I really don't have ideas of how would the simulation stimulate bars) If that's not practical, again the handy lab stuff like test tubes and\or erlenmeyers can come collaborative.

The most fascinating debate has been about vote buttons! I'd like to add my share to the debate: Cyclopropanetrione! I think the space filling model would do the job the best possible way. (Seriously, if not the logo, this works awesome here) 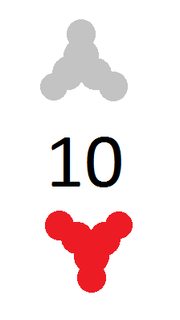 The problem is, it may look simple to you guys or be misinterpreted. I agree. But it's yet a valid idea for developing. Maybe, in some way it can become better and more distinguishable as a molecule.

If there is to argue about the obscurity of the molecule I would say that I was looking for a real triangular molecule of that kind of geometrical 2D shape. Better ideas welcome.

Molecules are really a great idea. Benzene itself can really work. But there's a problem: The simpler 2D structures of these molecules can easily be mistaken with some kind of geometrical shape. The more complex molecules, such as aspirin would look kinda messy. And we know that a logo should be recognizable by a majority of visitors, when doing a good job at demonstrating what the community's about at the same time.

I can give two suggestions about the logo: 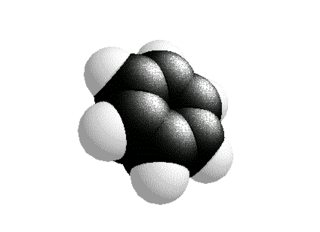 Isn't it charming? In my idea, the possible misunderstanding caused by the Lewis structure or ball and stick model of benzene is easily and beautifully solved with a 3D space filling model. It's well-known, explicit, neat and "chemical". (Not to mention aromatic)

As @tschoppi mentions in this answer of his, chemistry has always been known to make acquaintance with labs. (Since Boyle declared chemistry an experimental science) As a logo, it would also be logical to use something like a lab tube or such.

Preferably, some bubbles can help demonstrate a reactive gas-releasing chemical (As are popular chemistry logos in Tom and Jerry cartoons) . The point is, a site can have a very serious logo, or a more "colloquial" one. Comments can tell which the community prefers.

Some ideas for the vote buttons:

You can see this in action here:

The $\ce{-H}$ can be removed, and the charge moved to the center of the triangle, if you want — this representation is also quite common though I wasn't able to quickly find any images of it. Of course, the downvote one should be upside-down :)

Erlenmeyer flasks would also be pretty awesome for the vote buttons. /r/chemistry uses a split thermometer, which is another interesting idea.

For the logo, jelly benzene exists and can be used directly (might want to ask Richard first, but IIRC he was okay with it).

I'm particularly fond of Geoff's suggestion for an Erlenmeyer flask as the favicon.

This is the chemistry icon I Designed; Hope it helps.

This is the control of Up and down Vote.

52
Chemistry site design
44
Congrats, Chemistry SE is graduating!
14
Can site users suggest some design specifications regarding graduated site development
12
Finding a library to allow drawing chemical structures directly on the site
8
Can we have a font that harmonizes with inline MathJAX?
12
Common Molecules for Site Design

11
How do we promote our shiny new site?
44
Congrats, Chemistry SE is graduating!
14
Can site users suggest some design specifications regarding graduated site development
52
Chemistry site design
22
What's our (maybe updated) take on questions about (quantum) chemical software?
13
Meta: too much talking, too little action, and a proposed solution
6
What can or should we do with [pharmacology], [toxicology], [medicinal-chemistry]?
8
Gaps to Fill Without a 'Homework' Close Reason — Overview